I was awakened by the sound of the BBC coming from the kitchen. It turns out that heavy downpours of rain had flooded many parts of the U.K. And it seemed that my travel north towards Durham might be interrupted by the waters. Nevertheless as I have learned in past moments of uncertainty, you commit yourself to a course, even if it is doubtful. And so I arrived at King’s Cross Station an hour and a half early. And it’s a good thing I did. Because as I sat there waiting I heard a sound on the public address system that definitely announced that the train to Durham, my train had been canceled. So I got up, dragged my weighty bags and got on a different train also heading north. I figured that I would at least get as near as I could, which in this case was Newcastle. As I passed field after flooded field north of York the train announced that there would indeed be a stop at Durham. Evidently many of the people aboard had the same idea that I did and since they had just cleared a fallen tree we would be the first train to pull into the station.

My main reason for going to what would prove to be the smaller town of Seaham, on the North Sea Coast, was to meet Lenka Pavlíčková, a Czech carver who had made my own Nimrod puppet for our Great Ziggurat show back in 2009. We had only communicated online and I thought it would be good both to meet her and to interview her on carving for Gravity From Above. When I arrived at Durham I was met by George, Lenka’s affable English husband, who gave me a guided tour as we drove and quite a bit of the history English labor relations, since he was also a union representative of long standing. He considered himself a socialist, which was interesting on many levels, especially since Lenka, being a good Czech girl was anything but. Yet I enjoyed seeing a relationship where political agreement was not the glue. (One rarely sees this in America anymore.) 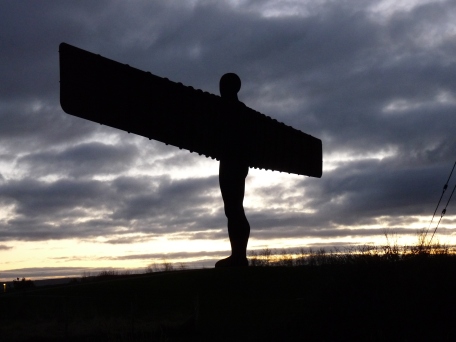 Angel of the North

In Seaham and vicinity I was taken to a spot on the coast that had had so many coal slag heaps once that it had been used by Ridley Scott in Alien to stand in as the foreboding planet where the creature was discovered. On this day though the North Sea was boiling in stormy anger as waves created fifty foot sprays as they crashed into the pier. We visited the old town of Durham and saw St. Cuthbert’s tomb in the old cathedral. I was also taken to see the Angel of the North, a strange statue near the motorway of an Oscar©-like giant with wings like an old biplane. We ended up at a classic fish and chips joint on the docks of Newcastle as the ferry to the Netherlands plowed through the nighttime waters lit like a Christmas tree. 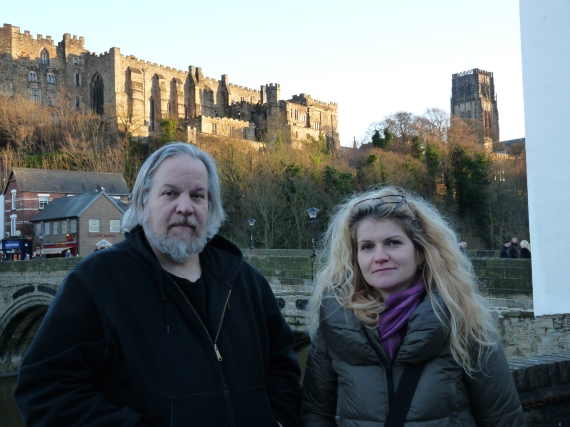 With Lenka Pavilckova in the old North England town of Durham

I did interview Lenka for the film and watched her carve her curious puppets in her little studio. Her actual craft is a bit worrisome looking to the casual observer since it features her turning a block of lathed wood into puppet parts all the while digging the blades into her body, which is loosely protected by a leather apron and some rather gauged out flat piece of wood. Has she ever missed? Does she have scars? Certainly. But she’s also the total professional. She was currently working on a year long project of making many marionettes for a Czech music video. She also showed me a clip of one her other customers from Costa Rica a man named Randall Gutiérrez who performed an extremely lively dancing puppet show. (This reminds me of how much puppetry there is besides what I’ve seen on my European exploits.) I also had a chance to see many of her current crop of figures hanging up nearby. After talking with her I had a sense of accomplishment. This was my last official interview on this trip. I could now relax and just enjoy the rest of my time in Europe. (Or so I thought.)

A puppet head near the beginning of the carving process

Don’t try this at home. Lenka is a professional carver who knows how dangerous this technique is. 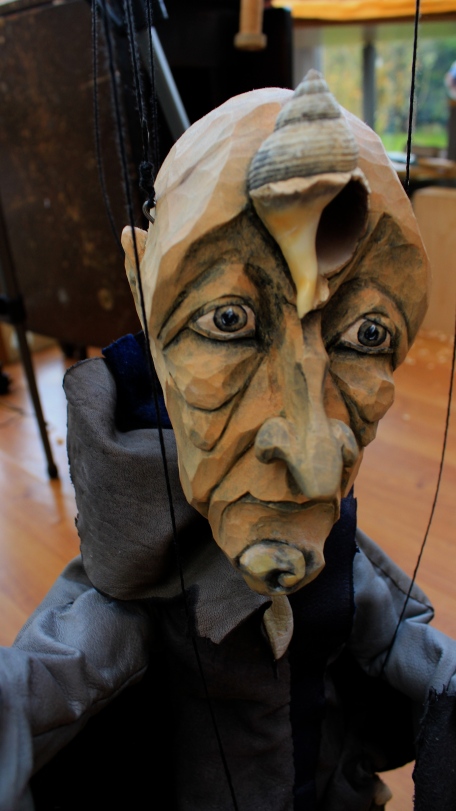 I’d call him Shellhead but Lenka calls him George after her husband.

My last stop in the U.K. was a trip up to Aberdeen Scotland to see my close friend and erstwhile Reckoning Motion puppeteer Carsten Hyatt who is studying systematic theology at the University of the same name. Carsten was staying with another theology student, David, in an apartment not too far from the campus. In a way I felt as if we were all contemporary monks keeping the coal fires low to conserve resources while having meaningful discussions about the nature of faith and humanity in the 21st century.

I did have a chance to see some Scottish folk music at a local club. Well to be precise the band called Amos was from the Shetland Islands, far north of Scotland, almost, and at times in its history actually, Norwegian. Between jaunty fiddle tunes the band members told extremely droll stories in a quirky accent that pronounced house as if it rhymed with goose. Carsten also took me around the town and campus and to an ancient Presbyterian Church, which was going through the same kinds of political/moral issues as Presbyterian churches in North America. All in all I found Aberdeen to be an intriguing town, though devoid of puppetry. I also spent yet another hundred dollars to mail back some of the film equipment I had borrow from my Swiss producers. But the relief to my back cannot be over stated. 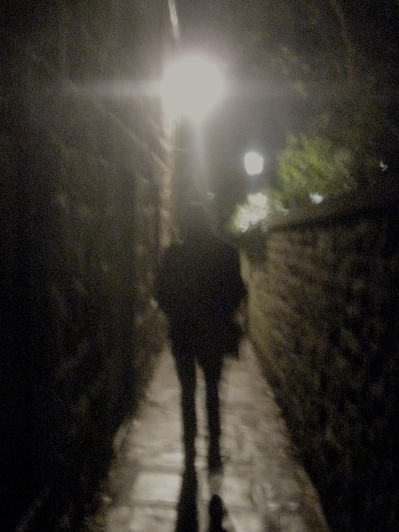 My friend Carsten in a back alley on the Aberdeen University campus.

At last it was time to go. Carsten saw me off at the train station. I arrived in Edinburgh, regretting that I couldn’t look around. Eventually I was packed into a cheap air flight and sent back to Paris for the final leg of my journey. (You may wonder why the extra flight? I actually saved money by flying out of Paris. Instead of Edinburgh or London. Plus Paris is a great place to do a little shopping before exiting the continent.) But the flight itself contained something I wasn’t quite wanting. One more little bug circulating in air, which my travel weakened system, nearly finished with its other symptoms, wasn’t strong enough to fend off.

And I wasn’t quite finished with puppets yet!

Next time we arrive back in Paris for the third time…