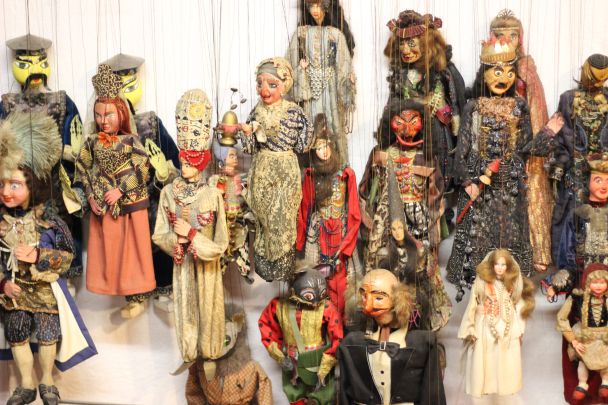 On my last day in Brussels I had been invited to visit the Théâtre Royal du Péruchet by Dimitri Jageneau. I must confess I didn’t quite follow his directions and so explored a little more of Brussels than I had expected to both on foot and by tram. Fortunately I had given myself plenty of time to get lost (a good stratagem for finding new places by public transportation) and so arrived just in time to set up for the children’s show of the Three Little Pigs. It was a rather cozy old theatre with wooden seats in an old farm house surrounded by industrial apartment buildings. As the performance was about to begin an older French woman came out ringing a bell and introduced the play, this would turn out to be Biserka Assenova, Dimitri’s mother, once upon a time Bulgarian, a theatre student in Prague in the 60s, a puppeteer in her own right and working several of the characters in this play.

Hedgehog versus the Wolf in the Three Little Pigs

The story began with a little parable about the rain, the wind and the sun that worked together to become a rainbow and then shifted into a marionette version of the classic little piggies. Now the winsome star of this fable was the rather louche wolf. He would enter the stage with a strange monotone song with lyrics that went something like this: ’Youp-La-La-La Youp-La-La Youp-La-La-la Youp-La-La’. And so bizarrely infectious was this that I heard several kids afterwards chanting, ‘Youp-La-La-La Youp-La-La’. And of course the wolf tries to blow the houses down, the straw, the wood and the brick. But he does it by turning around and around and becoming a mini-hurricane. By the end I was caught up in the story myself and was almost rooting for the unsavory canine.

Tin Tin and Company in Belgium Past Performers Unique to Peruchet

Apres la spectacle, I met Madame Assenova who was a sweet charming lady with much insight into the art of puppetry. She consented to be interviewed. I also met the two others members of the cast, a couple of younger women just beginning their life of puppetry. I was shown the adjoining museum which was chock full of puppet upon puppet with many from Asia, evidently Dimitri’s father, Franz Jageneau, had become passionate about Indian puppetry in particular and other countries puppets as well. Also gracing this collection were many unusual European puppets as well, including a few by famous Russian puppeteers Nina Efimova and Sergei Obraztsov. I was  quite astonished by the depth of the collection. Dimitri demonstrated several of the older puppets from the Péruchet theatre.

Finally I sat with Biserka (a strange name given to her in World War 2 as a tribute to a woman who helped her mother deliver her and died shortly thereafter) for an interview. We spoke for about 40 minutes about her time in Prague, her discovery of puppets and mostly, a common theme for many puppet folks, the unleashing of the imagination. And she was quite eloquent about how the current tendency toward all encompassing storytelling and media, actually stripped away the imagination rather than feeding it. The puppet leaves room for the spectator to create their own version of the story and characters. Again something similar to the Quays’ concept of reading the mask/puppet face which is incomplete. The incompleteness invites completion through an act of imagination.

I have no idea what this puppet wants. It just begged to be photographed at the Péruchet Museum. The name of the creature is Futziputzli from Kling Theatre, end of 19th century.

And then Dimitri sat down for around 50 minutes and spoke again about many subjects related to puppetry. He had inherited the theatre from his father. He had never intended to go into puppetry. And in fact he had a degree in European political studies. But during the course of his father’s decline and death due to cancer he had assumed the mantle of puppeteer. And had done a fine job in continuing the profession and researching puppet history. I’ll save much of what he said for Gravity From Above, but in the end, when it came down to it the point of puppetry in the 21st Century, it was ultimately about simplicity. Another theme that had recurred in my various interviews. We live in a time when things are so abstract that only the simplicity of a handmade creature made of a wooden or some other tangible substance could help us rediscover the value and mystery of the material world. 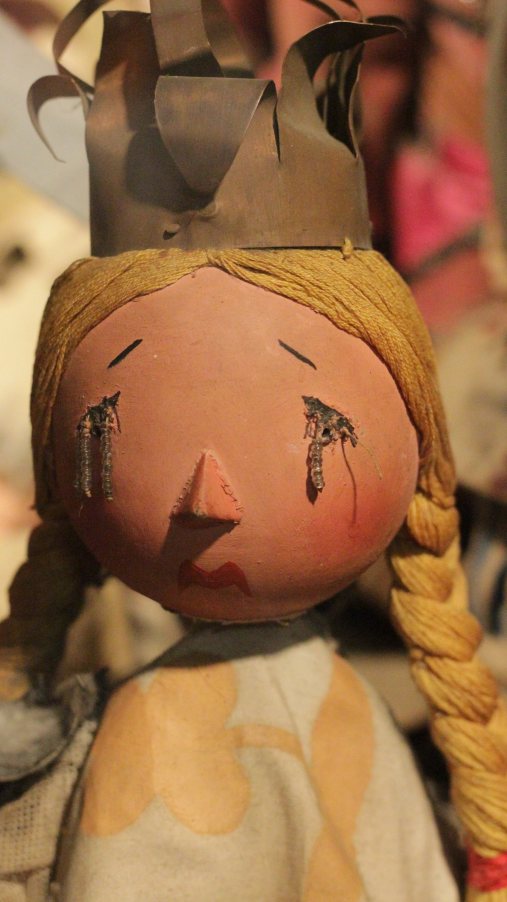 In the end I left Dimitri, Biserka and Péruchet feeling I had made friends. As I returned through the rain soaked streets of Brussels I felt I had understood more than when I had started. The two main puppet theatres of Brussels Toone and Péruchet were traditional in many ways, though also in their own ways remaining contemporary. They were friendly contemporains on a field without many players. Yet neither of them could claim to be hip or cool. And that connection to the past is what gave them a rich life. Each were multigenerational dynasties and in Toone’s case with a very long history as well. And yet they seemed to be on a battlefront, maintaining the classic style of European puppet art into the heart of the 21st Century. (Even as I write Toone’s future is hanging by a thread. To support them sign a petition. You don’t to be from Belgium or speak French. Just run this link through translation tool.) 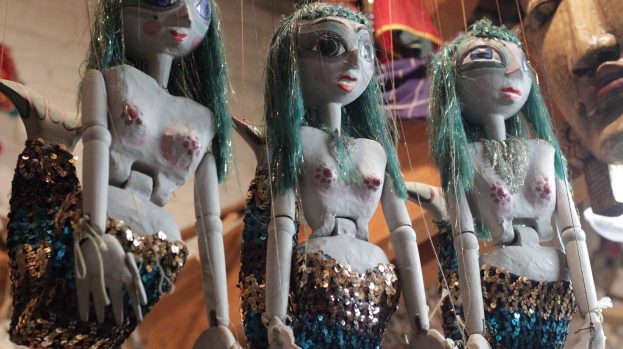 A few Watery Mermaids Hanging Around

(More information about Péruchet can be found in the French/English book available at their website.)