I had found the location of Erisioni, the traditional Georgian music and dance troupe as I was walking down Rustaveli Avenue (see this story). I stopped and read the word on the side of a wall where I had a vague idea that they were located. I knew just enough of the Georgian alphabet to slowly read the script. It looked like this: ერისიონი. The official office was closed but I knew that this was the place. And I knew to return someday closer to noon. So at the beginning of February I came back. I readied myself to be misunderstood and to misunderstand as I tried to get passed the language barrier. I entered the darkly lit building and carefully stepped up the paint cracked stairs where I could hear music joyful filling the building. Accordions (called garmoni in Georgian and tuned in a natural state) were releasing the expressive melodies to the pounding of the doli, a handheld Georgian tom-tom drum. Instructors were calling out to dancers from behind an old door in the ornate cavernous building. (For a look inside another section of this incredible structure read this.) 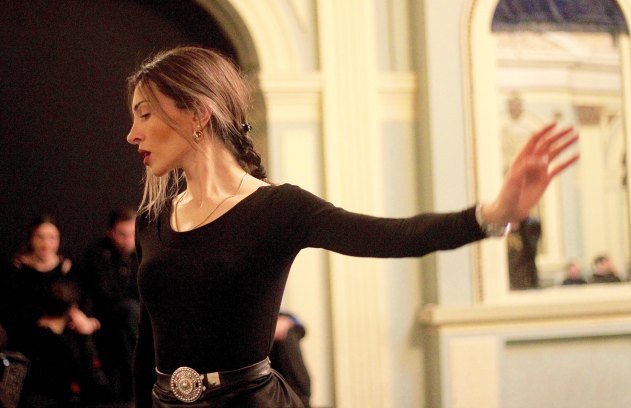 I had been told that the offices were on the 3rd floor by a girl speaking broken English in my first trip. And so I continued on up the aging stairs. One problem, if this was a European reckoning of the floors then the ground floor was the not the first floor. But suddenly I was at the third floor in America and the second floor in Europe. And the stairs ascended no further. And so I stopped at the top. Incredible male voices rang out from behind one massive door. Then there was another old door opposite. I cautiously entered. I said Gamarjoba (Hello, but literally Victory!), then tried to let the woman at the desk know that I spoke English. She then allowed me to enter the heavy dark wood door behind her. And I was greeted in halting English to Jemal Chkuaseli, the venerable Chief Conductor and head of Erisioni, a man I remember seeing on the Erisioni ‘Georgian Legend’ DVD, which had been recorded in 2002. He was pleased to meet me and shake my hand. Soon I was joined by another man Otari Bluashvili, the General Manager of Erisioni, and the man who really handled the day to day affairs of the troupe. Otar spoke English well. And so I explained that while I was currently working on a documentary about puppetry in Europe I had an idea about eventually doing a documentary about Georgian music and dance. They were pleased to hear it. And they graciously gave me open access to the practices and rehearsals. 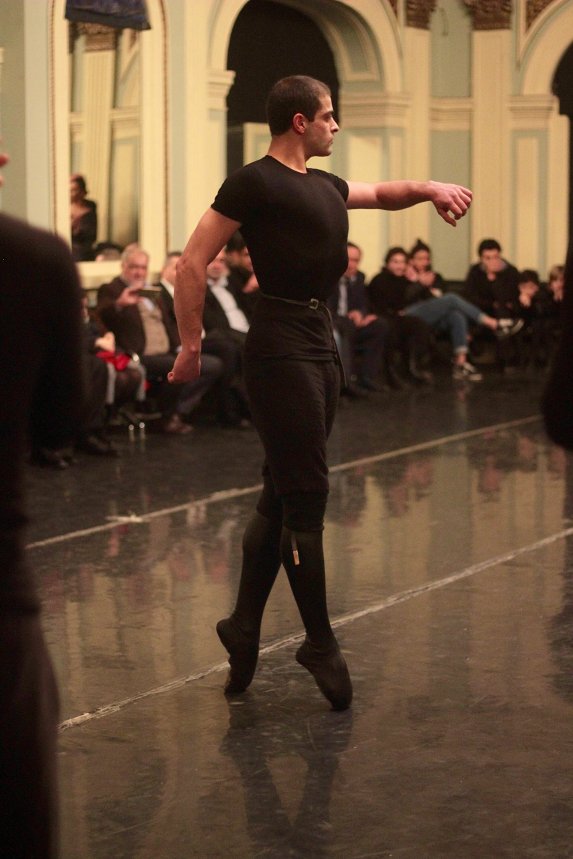 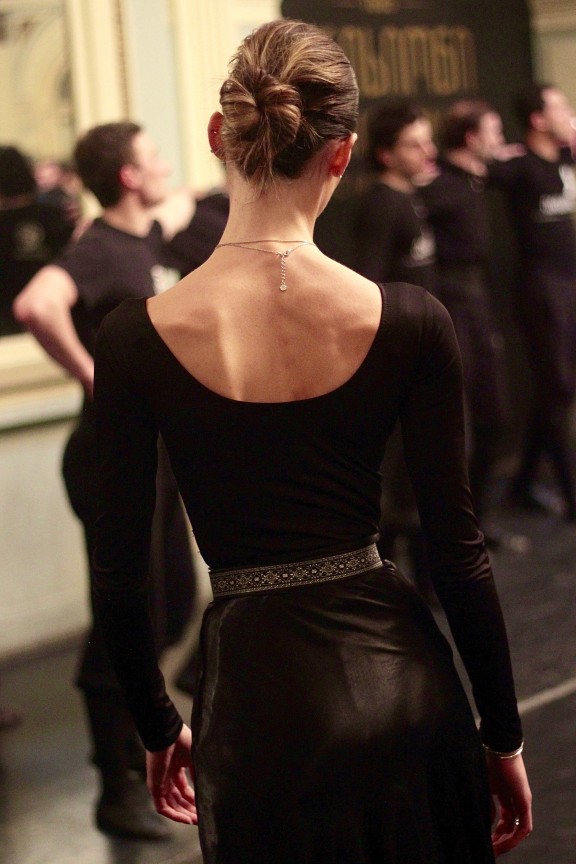 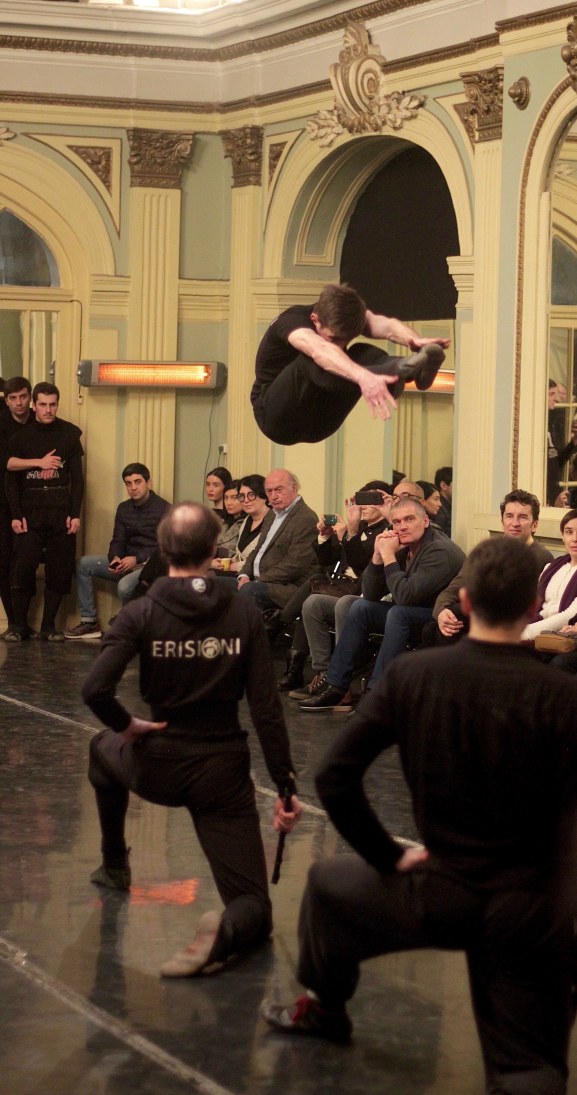 They immediately walked me across the hall to where 15 or more men were just beginning a second practice session for the day. The men greeted me and then Jemal conducted them in an ancient hymn, a song so profound that I could feel the hairs on my arm raise. Eventually they sang more songs affiliated with the actual show. Jemal let his son the actual choir leader Shermandi Chkuaseli resume his duties. The strength of their voices overwhelmed the emptiness of the large room. It was a sound that physically effected my body as well as my essential being. No performance on a stage could be as powerful. There were no microphones here. Just an oceanic swell of vocal vibrations. It was an excellent introduction to a few of the people who would inhabit my world for the following two months. The next day I would beyond that door hiding the musicians and dancers. 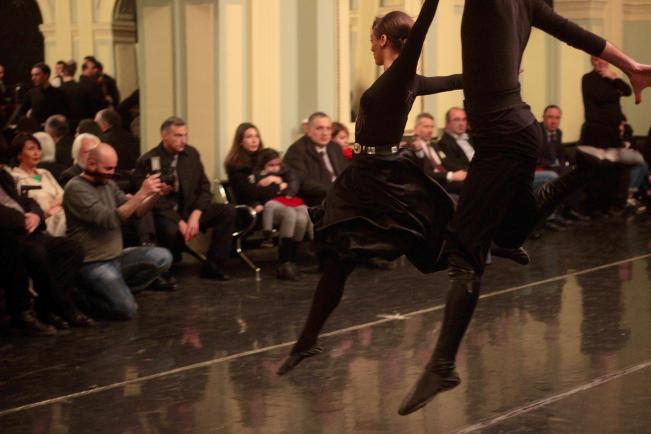 Gvantsa and another dancer landing before a few visitors at Erisioni.

I arrived to meet Otar. I told him that I would not be trying to photograph or film the practice yet. I just wanted to take it in without putting something between myself and the experience. I am appalled when I find people at a concert or some other unique event and they are present yet hidden behind devices to capture poor video of something that they will look at only briefly and then never again. One is only present in reality once. And this is a principle I try to follow as often as possible, even when visiting puppet theatres. Even when I am recording it I try to watch the real show more than the my little screen. Or else what is the point? 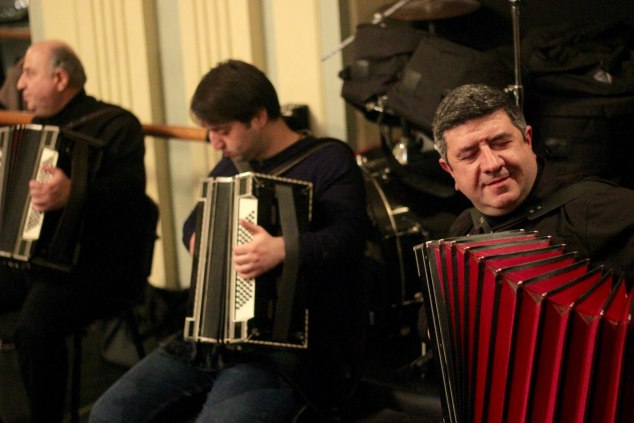 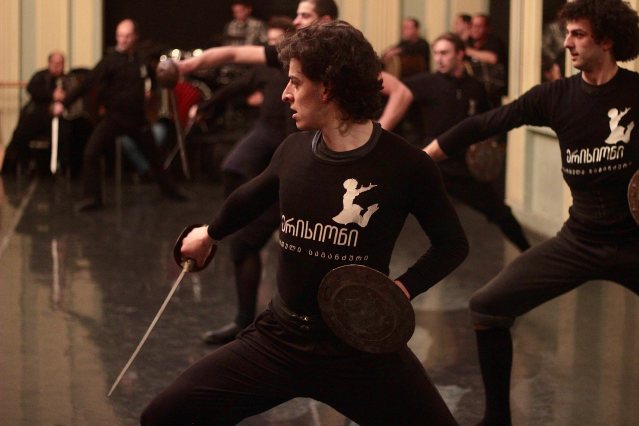 Vako with a Sword

Thus I was invited through the door where I would spend many hours in the subsequent two months. The dancers were stretching and and leaping, twirling and jumping in preparation for the rehearsal. Musicians were playing short bursts of well known tunes. They were about to run through a complete hour long version of the show. And I was sitting directly in front of the center of the hall. The nearest dancer would land a less than a meter away. A few other people were also watching this with me. Otar was sitting next me to explain a few things. Soon it was showtime. 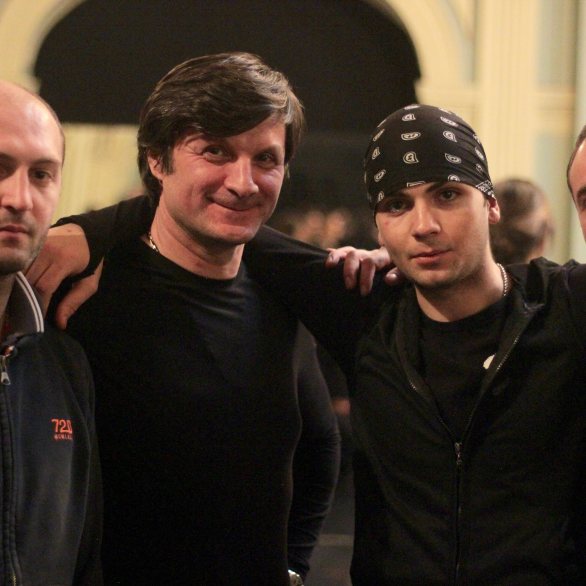 Levan (2nd from left) male choreographer and other dancers. 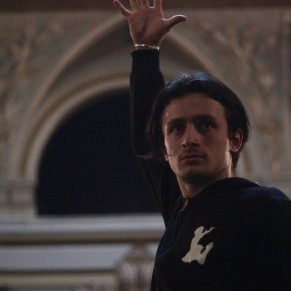 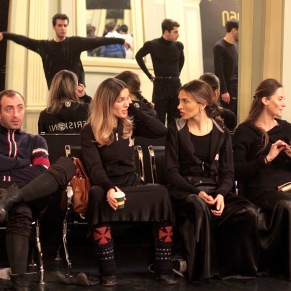 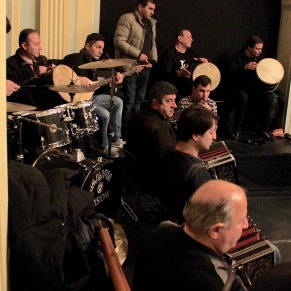 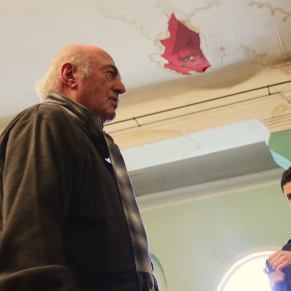 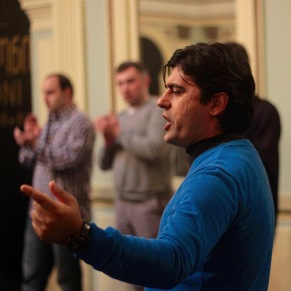 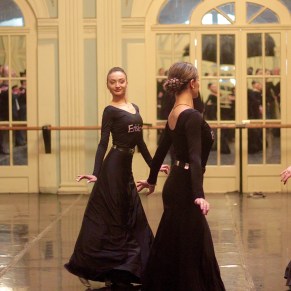 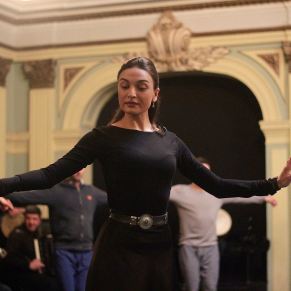 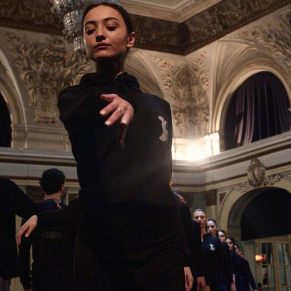 Nina at the head of the line. 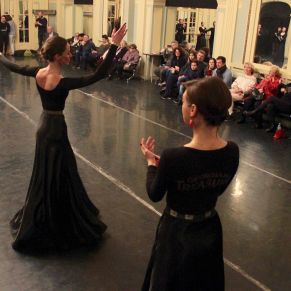 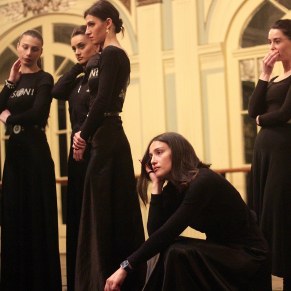 Gogoebi at the end of a practice.

The performance was like an explosion of dynamic rhythm and melodious charging sounds. It was a ritual I would watch many times. And eventually I was able to understand the order and rhythm of most of the dances. Though occasionally they would switch one dance for another that I hadn’t seen yet. An official live concert would run to more than an hour and a half. All of the performers would be in traditional dress. The men in chokhas, the women in the many complicated styles of regal dresses with headdress and scarves. But here they were dancing in their black practice clothing.

Lines of men and women swarmed the stage. Shota the dancing drummer came out. Male voices filled every cornice of the grand hall. Three garmoni played a bold tune as drums and a bass guitar hit a driving beat. Suddenly there were sharp turns of melodic structure, fragments of harmonic dissonance. The male voices sang songs like yodels, songs that seemed to emerge directly from the earth, Songs like locomotives building steam as they careened down the tracks. Eventually there were numbers that featured the women, who seemed to float across the studio, men who stamped and jumped and spun. One man seemed to be able to turn like a spinning top all the while jumping on his toes. Another young wiry dancer named Tornike seemed to spin off into the air and land on his knees then coil up again from his knees and back down again like a slinky toy. The men danced with a ferocity and daring that had obviously been developed in years of warfare as Georgia has been the endless target of invaders for millennia. Meanwhile the women seemed to be on another plane altogether, which fairly sums up my observations of Georgian culture. The women were grace and beauty incarnate. And one interesting point in all of this. Though the men and women dance together in this show, they rarely, if ever touch. And that again says something rather instructive about Georgian culture. 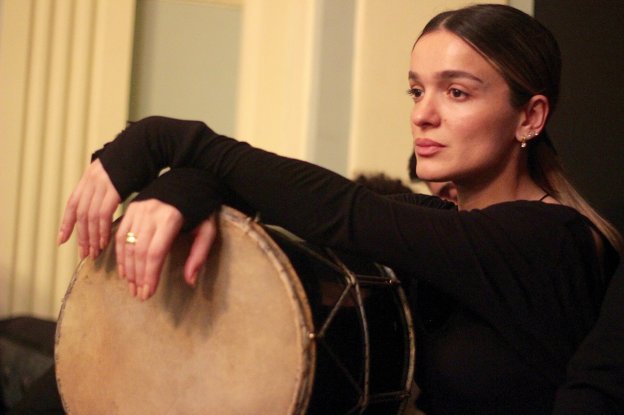 Lika and a Doli

I would come back over and over again. I would watch individual dances repeated and repeated. I would hear the songs the shook the room. One singer Ilia had a voice that could shatter glass. Eventually Shota the drummer came up to me and asked for a photo. So did Tornike. And in fact most of the singers became curious about what I was doing. Nina spoke more English and was able to talk with me a little eventually more and more dancers and musicians approached me. And when I made an online album of about 200 photos I became everyone’s friend. Eventually Otar would ask me to come along on the bus with them for a small version of the full dress performance. But I’ll save that story for another time. 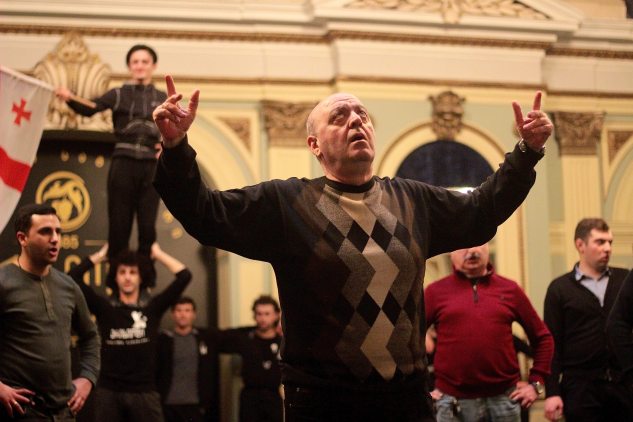 Meanwhile I’ll say this, if this had been my whole experience with Erisioni I would have considered myself extremely fortunate. Yet there was indeed more to come!

Meanwhile deep thanks to those who have contributed to this journey along the way. It would sound like a cliché to say I couldn’t have done it without you, but it’s the absolute truth! Anyone wishing to help out too can easily using the PayPal link below. Thanks, Byrne 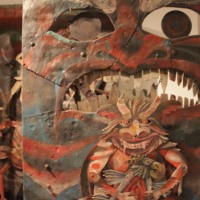