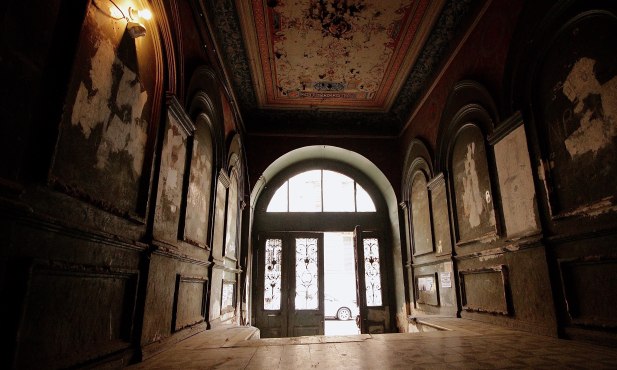 Walking through Sololaki district in Tbilisi I stopped in this open door for a minute.

I haven’t written for a while now. It isn’t that there is nothing to say. It’s that I’m not sure exactly where I am. I am certainly not where I thought I might find myself three months ago. I’ve been waiting for more resolution to give you all some account of my time in Tbilisi Georgia. But the resolutions are slower in coming than I imagined they would be. So I might as well report on what I can say. Which isn’t much.

Some rather haunting and cryptic street art.

Not long ago I thought I might get most of the money to finish up Gravity From Above. I then realized that I would have to downgrade what support I thought I had. Now I am wondering if I’ll get any help at all from the sources that seemed promising. If it sounds like I’m being vague I am. Let’s just say this the funding isn’t there… yet. And because I stumbled into some murky cultural waters that I didn’t understand let’s just say I don’t know if anything will come my way from that direction. But I am still hoping to hear something.

Then there is my life in Tbilisi. It’s not bad at all. But it is much slower commencing than I thought it would be. Again odd cultural issues play a role. Strangely many of the friends I have made are slow in getting back to me. If it was just one person I wouldn’t think too much about it. But it’s almost everyone. It probably didn’t help that I arrived in the holiday season again. And so had to mostly sit out a month waiting for it to end.

I was looking forward to editing Gravity From Above. I had the time. Oodles of it! But I wait for returned emails, Facebook messages, etc. This is a cultural thing. In America we are trained to get back to others as soon as possible on the Internet. But in Georgia I get the feeling that emails aren’t seen as being quite real. Which is fine. I’ve been saying this for years. And if I were settled in more it wouldn’t bother me. I would have other ways of contacting people. But I don’t feel I know people well enough yet to just call them up or stop by. So I wait.

And that goes for my work as well. The museum project is there, down the road. Eventually. Though the architectural design part has been siphoned off. But that doesn’t bother me. If anything was going to be taken away that would be what I was expecting. And truthfully there is a lot more politics in all of this than I imagined. And by politics I don’t mean office politics. I mean the real beast. Government officials, state and city budgets etc. And that’s about all I can say about that. 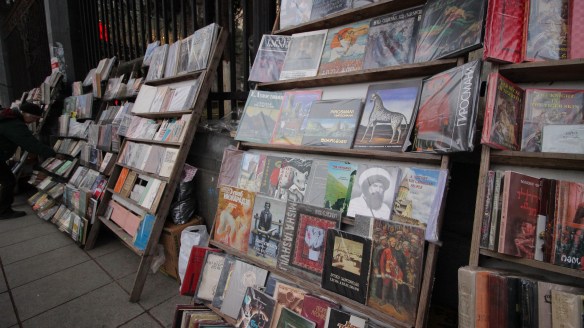 Art books for sale from my favorite street vendor.

But I’m not without work. The plan is to have me teaching puppetry in English for students in the schools. And while I am planning that, I haven’t got the paperwork done yet, because I have to see what the legal prospects are for me as a resident. So again I wait. And hopefully this will be resolved relatively soon. But then again this is Georgia where I’m discovering that everything takes time. But when you finally get the signal then the question will be why isn’t it finished yet? (See the architectural issues above.)

The street art in Tbilisi is endlessly fascinating

And then there is the question of money. So far I am coasting. But this can’t last. And I’m not really sure how I will fare in the future. Everything is up in the air. And how will the documentary, which is so close to being done, be finished?

And you know I’m not worried about all this. I figured that there is a reason I followed the breadcrumbs here. So meanwhile I explore the city. I’ve taken bus trips to nearby villages. I’ve hiked up the mountains near Tbilisi. I’ve explored more art and culture. I’ve discovered a couple of worthy bookstores previously unknown to me. I’ve gone looking for practical necessities.

Old horse in village seen on a bus ride. (Two hour round trip ¢17)

And I’ve discovered the many things that hardly exist here. Where is a lumber yard? Can I find black string for puppets? Food ingredients that are like gold: Bottles of vanilla??? Molasses. Malt vinegar. Decent peanut butter. Maple syrup. Cream of tarter, which is really weird since it’s a wine derivative and wine is everywhere here. Recognizable cuts of meat. Most Chinese ingredients. Any Mexican ingredients or spices. Let alone real salmon. Oh Alaska you spoiled me!

Stop and watch this for a little taste of joy!

But oddly I found some real pluses too. For instance I noticed that Georgia has about 20,000 people from India, mostly students at the state university. Thus I reasoned they must have Indian spice stores. I’ve found two! And one guy Vijay was a real help. But there are much fewer Chinese. Thus real Chinese food is much harder to find. And there is something that Georgians eat at the few ‘Chinese’ restaurants which has very little to do with China. But great news! Just down the street from me on Vazha-Pshavela Avenue they just opened a real Chinese restaurant since I’ve been here. And I’ve gotten in good with the owner, Shelia, from China by way of Vancouver. And she has two, count ’em, two Chinese cooks. Okay I survived 22 years in Haines Alaska without Chinese food. I think I’m going to be all right. (In New York City I used to go to Chinatown all the time.) 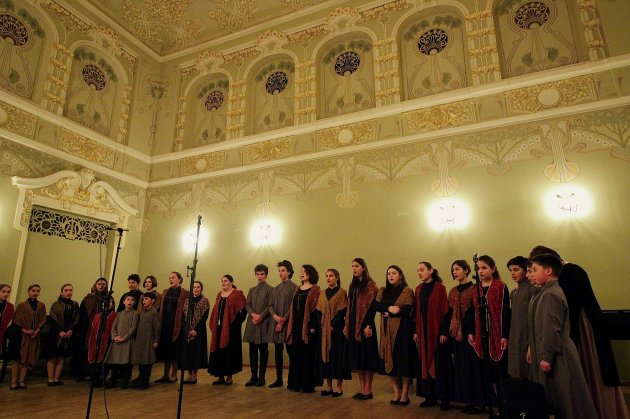 I did spend a little time with friend and photographer (and my landlord) Mariam Sitchinava and her pixie daughter Sophie. I did visit my good friends at the hand shadow theatre Budrugana Gagra. And I was welcomed with open arms and kisses on my cheek from everyone, men and women. And I got to watch a complete show of their shadow version of Bach’s Saint Matthew’s Passion. And for the premier even the new president of the country, Salome Zurabishvili, was in attendance. I was quite proud to call these folks my friends. I will eventually write a more detailed review of this piece. As well as a report on the work on Mariam Kapanadze’s unusual animation project. 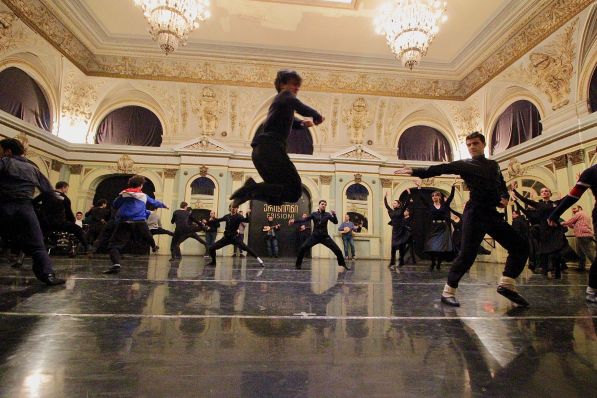 And then I found myself back at Erisioni where I was greeted as a returning friend. Otar Bluashvili commented that I indeed returned in December just like I said I would. When I first stepped into the dance studio several of the young male dancers broke into applause. And later when I finally saw the women dancers again I was greeted tenderly with kisses and very warm smiles. And today I stopped in and was invited to their big show this Sunday at the Philharmonic Hall where I was offered a better lens for my camera. I took a few photos today and greeted several more friends. 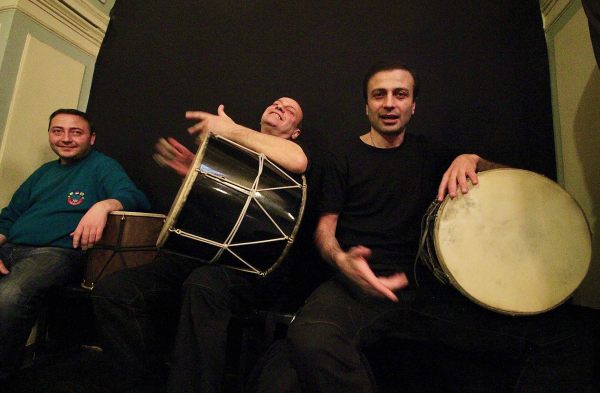 When I first arrived I felt even more disconnected than I did last year at the same time. With the financial questions hanging over my head, with Gravity From Above back in some sort of limbo, with friends yet to find me again, I was seriously wondering what I was doing here. The ground did not feel solid. I still have no idea how the practicalities of anything will work out. From getting a residence permit, to finding a permanent house to live in, to getting my container full of possessions, including my massive library, here, to getting Gravity From Above finished. These question fed my sense of dislocation.

Looking down on Tbilisi from Mtatsminda.

Slowly I have been finding myself at home. I remember the day I walked up through Vake Park past the Soviet World War 2 Statue into the mountain, and then down the other side I felt at ease as I stopped at Parnassus Books, which also had books in English. More importantly there were two university students working there, Mariam and Ana. A wonderful conversation led to their offering to find someone to help me with Kartuli (the Georgian language). Within a week I had another university student Sandro helping me, for free! But it was on that walk, even before I got to the bookstore, that I thought to myself, how much I was feeling better about being there. 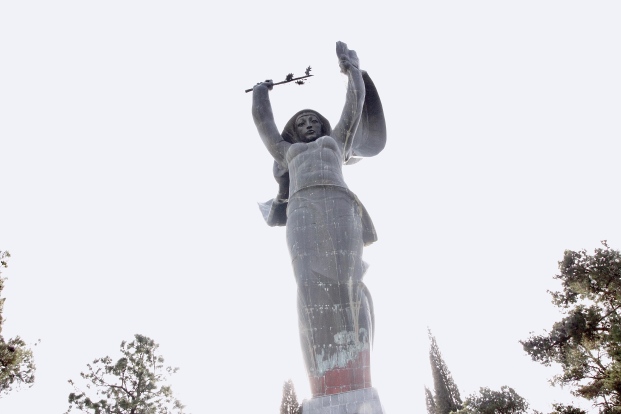 And there have been many other discoveries. But we’ll end our narrative here. What will tomorrow bring? I have no clue. None. Will I ever get enough money to finish up Gravity From Above? Will I find the wherewithal to get my stuff here? Will the Georgians let me stay? There are answers to these questions, but not yet. And so I am left with the big question mark. But you know a life without question marks really isn’t a very interesting life. So I accept that. 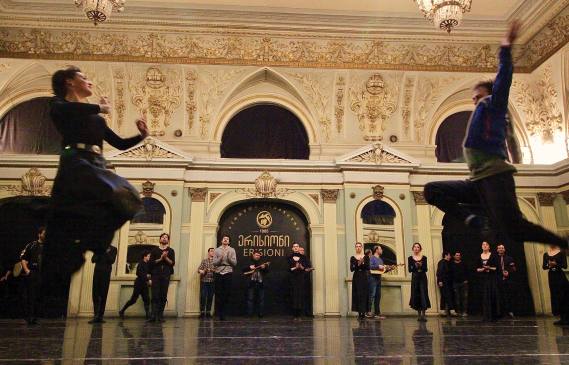 Oh and if anyone wants to help me get this bloody documentary finished….

There’ll be more to say, and soon, but for now I’ll just leave you all where I am. Wherever that is.

So if you wish to help out financially you can help me through PayPal. You can pass on a one time donation, or commit yourself to a small amount on a regular basis. Anything you choose to give will be helpful. And if you are one of those people who can help out in a more substantial way do consider it. I really am close to finishing Gravity From Above. But the amount needed is beyond me in this moment. So get in touch if you feel so moved. Click to donate. And thanks all of you for tagging along on this strange journey. CLICK ME! 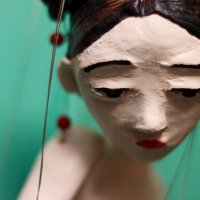 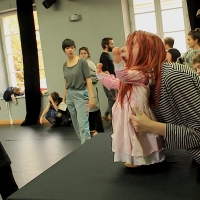