Duck meets Bear on a Deserted Island at Budrugana Gagra

The next day I kept an appointment with filmmaker Tinatin Gurchiani, who directed the documentary The Machine That Makes Everything Disappear. The film asks questions of and sometimes follows various Georgians, mostly below the age of 30. She poetically unfolds their dreams and aspirations living in the Georgia of the moment, along the way hitting notes of the comic and the despairing, the tragic and the hopeful. I consider this documentary essential viewing before a journey to present day Georgia. It does not give the tourism gloss but is made by someone who is not blind to the reality of her country. Tinatin met me at Rezo Gabriadze’s Cafe, located next to the best marionette theatre in Georgia. We were to meet someone who would let us know the possibilities of interviewing the highly respected Gabriadze, whose greatest puppet show was entitled The Battle of Stalingrad. (I need to see that!) 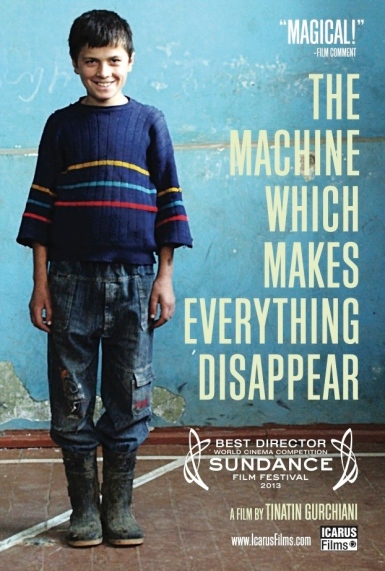 Having forgotten to take a photo of Tinatin Gurchiani this will have to do. Look for it.

Tinatin came up carrying her recently birthed baby, Maryam, like a suitcase in a baby basket. (There will be more Maryams to come. The country is full of them; as well as Elenes, I would meet three at once below, Sophos, Ninos, Annas, Ketivans,Tinatins and Tamars among other names.) I volunteered to help carry the precious human luggage and we sat at the cafe, where I proceeded to try a mixture of hot wine and tea. I had contacted Tinatin a couple of years back after being impressed with her documentary. She’d said if you ever need help trying to contact Rezo or others let her know when you come. And so I did. And I was glad I did too.

Tinatin, my second contact in Tbilisi, proved to be able to get me into places I had only imagined. By the time the day was over she had meetings arranged for me with Gela Kandelaki and the Budrugana Gagra hand shadow puppet theatre as well as a meeting at the ballet that might conceivably allow me to meet Nina Ananiashvili, who was the director of the State Ballet of Georgia. But alas Rezo would have to wait, seeing as they were on a small tour. But there was a good chance of seeing him before I left. 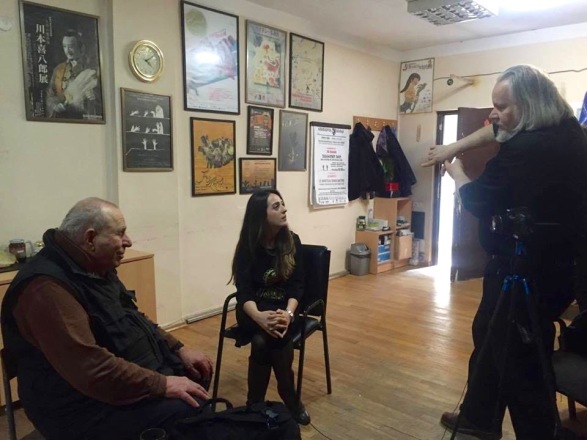 That Thursday I found myself waiting around the back of the Rustaveli Theatre for someone to meet me. A friendly girl with long dark brown hair named Elene (pronounced like Elena) came out to greet me and take me into the Budrugana Rehearsal space. It was a darkened medium sized room with a partially lighted screen in the back of the room. As soon as I came in the lights came on. I then met long black haired Sophie, who would be my official translator. (I’d better stop mentioning long hair, since Georgia is a sea of girls with long straight dark and black hair.) I was also introduced to another Elene who had very curly dark hair. (How else am I going to keep the Elenes recognizable?) They eventually introduced me to a shorter haired Elene, who provided tea, cookies and shadows. I asked how they identified so many girls with the same name. They said that the first Elene was the smallest. Curly haired Elene was the middle and short haired Elene was the biggest. But then I said “Wait a minute short haired Elene was not taller than ‘small’ Elene. Then they pointed out that they meant youngest to oldest. There were several other players as well, more women and men.

And finally there was Gela Kandelaki himself, he reminded one of a large elder Pooh bear. He warmly grasped my handed and welcomed me to see them practice. He was garrulous and was off and explaining many things before I could get my camera out for the interview. I suggested watching some of the rehearsal before the interview so that I could get an idea of what exactly was this art of hand shadows. An excellent idea.

The lights were dimmed and the partial screen glowed in a raised rectangle. It was explained to me that I was about to watch Bach’s Second Violin Sonata done as shadow theatre. And if you are at all sensitive to Baroque music you probably just went as blank as I did wondering what on earth you were about to see.

Hands. An abstract play of hands following along to Bach’s music. Abstract and yet completely human, a dialogue of motions with the second most expressive part of the human body. And it was utterly fascinating, inspiring thoughts I didn’t know I had. And that was followed by a fantasy featuring Louis Armstrong as a bear made of fingers. And Louis falls in love with another finger creation of jazz singer Ella Fitzgerald. And then the Louis-bear loses her. (They never were an item in real life.) All done to live recordings of Louis and Ella, Benny Goodman and others. Again totally inspired. That was followed by a sample from an older piece again featuring a bear, Gela loved the fact that I was from Alaska, trying to swim off an island, and somehow it involved the four seasons. The more I watched the more I thought of new applications for this unusual technique. And I came back the next day to watch them rehearse an abstract hand shadow version of parts of Saint Matthew’s Passion. (!!!!)

I believe the Louis Armstrong bear is the one on the left. There is also a piano playing spider. Clarinet playing bird. And that’s a giraffe… and the other bear it must be Ella Fitzgerald.

Absorbing stuff! And unlike anything I’d ever seen before. With Sophie’s help I interviewed Gela for my Gravity From Above project. When I asked Gela if there was a connection between dance and the balletic hand motions I was viewing, he not only said yes but went on to elaborate not only that connection, but that between Georgian music, poetry and art. And told me that he was also involved with animation as well. Curly haired Elene was eager to show me examples of her rough animation style, preferred over slick commercial work. Brown straight haired Elene was also an animator besides being a hand puppeteer and a help at with translating between myself and Gela one day.

I visited them several more times before I left and on the last day I showed Gela and curly haired Elene samples of my rough cut for Arca, a strange little film I directed a while ago that is still not edited together yet. They found it mysterious in a very good way. Before finally leaving Gela grasped my hands and spoke a Georgian blessing on my endeavors. I left knowing that I had made friends that I must visit them again someday. 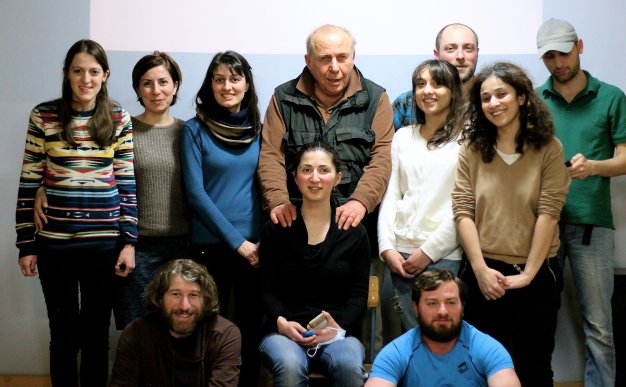 Meanwhile I had a rendezvous with Prima Ballerina Nina Ananiashvili. But more on that next time.

(And go back and read what you’ve missed!)