Love in an Abandoned Village

Keeping the light on in Mariam Kapanadze’s Abandoned Village

Back in January of 2018 I was visiting Tbilisi Georgia for the second time. I had stopped into visit my friends at the hand shadow theatre Budrugana Gagra. A few actors were there waiting for the rest to arrive when a young man named Irakli Toklikishvili walked in with some images on a sheet of paper. Suddenly Mariam Kapanadze and Elene Murjikneli lit up happily and went over to see what he had brought them. When I asked Elene what it was she said it was for Mariam’s animation project. I looked at the paper, a decayed landscape with a cabin on it. I thought it interesting. I looked for the drawings of the little characters who would be inhabiting the landscape. None ever materialized. Mariam said that the short animation film was about the landscape itself. I thought that was a beautiful idea and then didn’t think too much more about it. 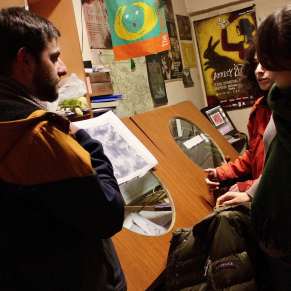 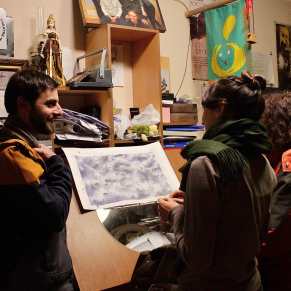 To Mariam and Elene

While I was back in Alaska someone told me about an animation festival calling for submissions. I thought of Mariam’s film. I wrote to her. But she said it would be a long time before it was finished, maybe December 2019. I thought that there must be more to the story if it is taking so long. And so when I arrived back in Tbilisi back in December 2018 I asked Mariam what the story behind the short film really was. And then she explained it to me. And even in her imperfect English I suddenly caught my breath. I had never heard of such a simple yet complex idea. 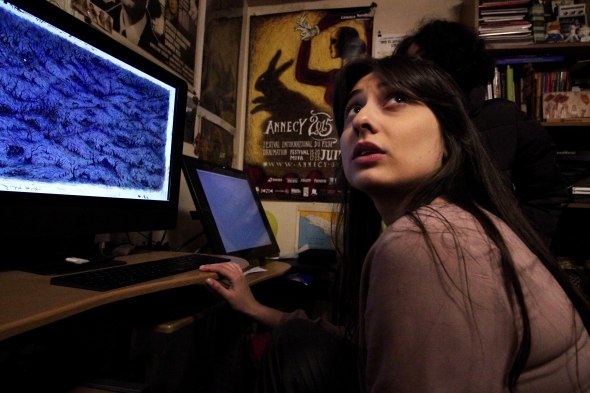 Mariam Kapanadze at the Animation Computer 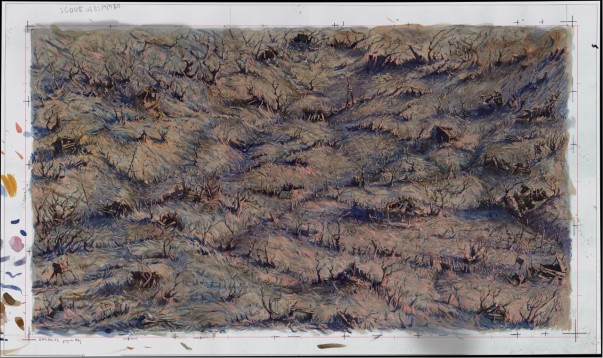 A Original Painting by Irakli Toklikishvili

Now if that sounds like nothing happens you really don’t understand what Mariam is attempting here. In a way what Mariam is creating is something that has rarely been done. A living painting. Which is why for me to tell you what it is about is not to ‘spoil the plot’. What will matter in the end is simply you, stopping the insane business of your life for 13 minutes, watching the subtle transitions of a day in an abandoned village to ponder them. For Mariam has something up her sleeve much more complex than a mere picture. 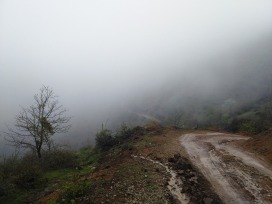 A Dirt Road in Zodi 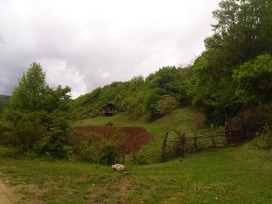 Mariam in the Mist

Is this village based on a real village that Mariam knows? Yes and no. As a young girl Mariam’s parents would take her to the family’s ancestral village in Imereti called Zodi. This is the village where her grandparents had lived in when she was a child. She remembers Zodi being full of life and people. But since then, while it is not quite the abandoned village of her story, some parts of it are not too different. This is actually a problem throughout Georgia as small villages wither as the youth leave to go to the cities. Of course similar problems have occurred throughout the world at one point or another as transportation and technology change the way we seen the world. But Mariam is very quick to point out that her film is not really a story about this particular village. For her the village in her short animation film is about the loss of love and joy. The abandonment of love, that the life of these old villages represented, the families, the songs, the communal feasts. 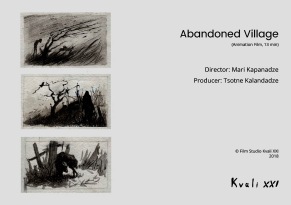 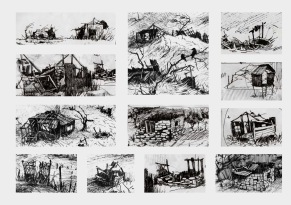 There are 21 paintings by Irakli Toklikishvili containing each cell of the animation for this piece. And then there are hundreds of small subtle effects that change slowly during the course of the film. Mariam says that her favorite filmmaker is the Greek Theo Angelopoulos. And another influence is Andrei Tarkovsky. And the slowness of the changes within the frame are certainly reflect their influences. Elene Murjikneli, her colleague at Budrugana Gagra, has been working with animation for twenty years, is both her assistant and at many points her instructor as they create this unique project. Other animators include Natia Pochkidze, Giorgi Chanturia, Nina Gvasalai. It is being produced by Tsotne Kalandadze for the “Kvali XXI” film studio. And when I asked where she got the idea for static frame without cuts she credits Gela Kandelaki, the Director of Budrugana Gagra, with the suggestion when she presented the idea to him. 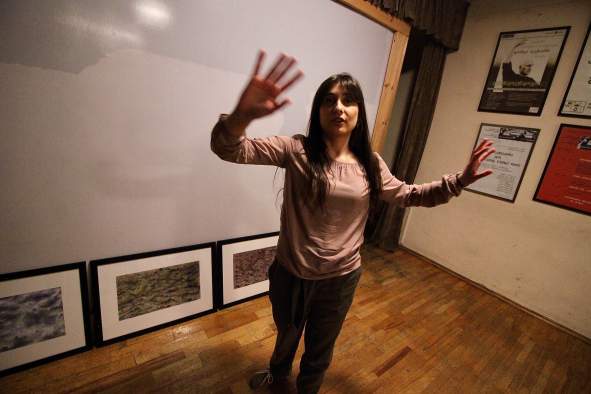 Mariam with some of the Original Paintings

Mariam Kapanadze originally conceived of the idea in response to a call for submissions by the Georgian National Film Center, when it called for its yearly submissions in 2017. She won the competition. They wanted a budget and a time frame. This was Mariam’s first attempt a complete film, and so she gave herself around two and a half years to complete it. She was awarded money, which by American standards would hardly pay for the electricity for the computers and lights. But Georgians have become quite adept at stretching budgets beyond what many further to the west would consider possible. In March of 2018 the project received a bit more funding. The money was important to keeping The Abandoned Village on track to a December 2019 completion date.

Mariam with the Portfolio of Art for the Abandoned Village

And yet this certainly isn’t a project with money as its central goal. Mariam told me that that even though the film has Georgian themes she considers it to be universal. The film while essentially being a silent film, has one character, an old man who can be heard mumbling inarticulately. He turns a light on in a rustic shack in the dark. And in Mariam’s eyes the entire film is a struggle between the life of light and the death of darkness. And this darkness is not an abstract thing for Mariam who is old enough to remember the times when the electricity failed regularly in Tbilisi. For Mariam the light brings the music of birds and the dark brings a muted muffled silence. And it remains for us to keep the light on in the dark. Mariam hopes people are reminded by this film to remember the goodness in life, the times of joy, and especially the love. If that sounds like a lot for a 13 minute animated painting then you should hear Mariam talk about it.

Better yet look for it sometime next year: მიტოვებული სოფელი The Abandoned Village.

Photos of Byrne & Mariam, Mariam in Zodi and all Production plates and art © Mariam Kapanadze

Please support us through PayPal. We could really use the help. Just click this link and help us out with our expenses in Georgia. Thanks!! 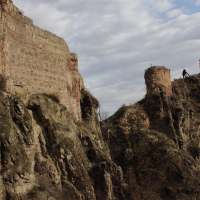