East of Moscow and Mecca 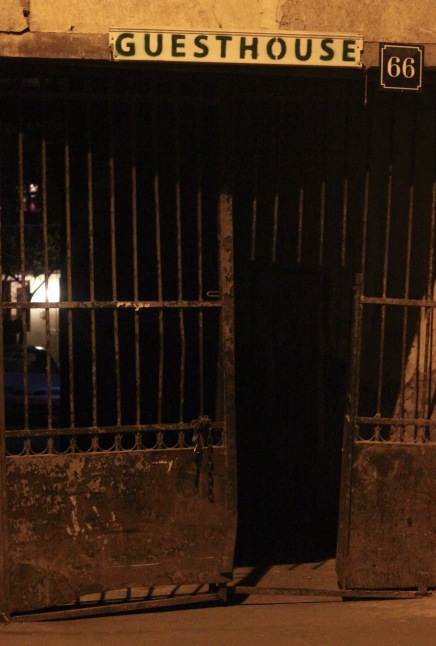 The Entrance to the Guesthouse

I’m told that if a person is born blind and later in life has an operation to see that what happens when they finally look around is that they are assaulted by colors and shapes that make no sense. It is a riot of chromatic sensations, not a moment of clarity. Arriving in Tbilisi , Georgia was like that for me. Not that it was a disarray of bright colors. Oh no it wasn’t. It was indeed pure darkness.

Tbilisi from the Lot jet window

The Polish Lot plane landed at about 5am Georgian Time. The formalities at the border were the nearly non-existent. I looked and found a thin man, perhaps in his fifties, who was holding up a sign that had the words BYRNE POWER scrawled on it. I saw him and tried out my first Georgian word on my first Georgian. “Gamarjoba.” (Hello.) He nodded and silently motioned me to follow him to a small worn gray car. I put my bags in and we drove silently through the Georgian night. I turned back to look at the airport. Tbilisi was a city of well over a million people. The airport was over twice the size of the one in Juneau Alaska, a city with a population of 35,000. I guessed not that many people were flying.

The Streets of Tbilisi

My driver didn’t say a word during the entire trip, about a half hour ride. A small radio was on, but just barely. It sounded like insects rasping. I’ve heard occupied headphones on the London tube that were louder. At first as we drove through the darkness, things didn’t seem too different. The road was essentially a low grade four lane highway, in need of a little repair. Eventually we started passing commercial buildings with Georgian script on them. Eventually we were surrounded by one, two or three story structures as we turned off the highway onto the city streets. As I looked out at the bare trees and crooked lanes and deteriorating buildings under the yellow street lamps I noted the endless indecipherable Georgian alphabet adorning so many buildings. A sense of the alien was creeping upon me, infiltrating every pore of my scalp. 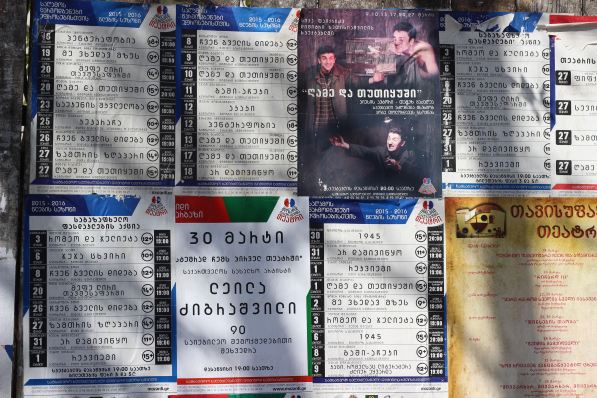 Turning onto a narrow side street we passed darkened houses. But they didn’t really look like houses. Maybe warehouses? My silent guide pulled the car over and I hefted my stuff down the road a little piece. I looked over and saw a glowing green sign and said under my breath, ‘Aha, that must be it.’ It wasn’t. We arrived at a menacing looking gate, with the words GUESTHOUSE painting on a board. Beyond it only inky blackness. This was my destination. We walked through the iron gate into what at first seemed like a garage, but was only a passageway. We entered the courtyard, which was illuminated by a single light from two floors up in an old structure with ramshackle wooden balconies with another painted sign reading TaMaR. I had arrived at Tamar’s Guesthouse. I walked up met Tamar, a pleasant lady who was concerned for my journey. Evidently my quiet driver was her husband. She spoke passable English and introduced me to my tiny room. I was staying in a room in their flat. I put my heavy luggage down. Laid down in the dark and and wondered where on earth I had actually landed.

The morning light came with the cheeping of hundreds of birds, but I was about three hours off from European time. I lounged around in bed listening to the sounds nearly right outside my door of Georgians moving around and talking. It wasn’t early mind you. Georgians don’t seem to get going till around 10AM. And not just these Georgians either. Most Georgians! Georgian streets at 8AM are still quiet.

At last I stumbled out into the Georgian daylight sometime around noon. I started walking with a rough idea in mind of getting to an ATM for Georgian lari, of getting a metro pass stocked full, of finding food, of seeing where I was. The first disorientation came as I started walking down my street, a street with a name I still can’t pronounce two weeks on. Try it! ‘Tsinamdzghvrishvili Street’. It’s tough for Georgians! The sidewalk, if that’s what it is, is about as even as the sidewalks in Anchorage after the 1964 quake. Tree roots, unfinished sections, cars parked on the lumpy asphalt walkway. And then the real problem came when I had to start crossing the streets. The concept of the traffic light has been slow to catch on here. Very slow. (See escargot.) And so you just take your chances. The cars don’t really stop. You walk out into the traffic judging whether you can make it or not. If you look at the cars, trying to stare them down that doesn’t work. Then they assume you see them and that you will get out of the way. You have to step out without making eye contact. When I tried to cross at one point I was utterly baffled. It was a four lane highway. No one was even thinking about slowing down. I surveyed the landscape for some way across. No way. Finally a woman stepped off the curb and I followed her. They wouldn’t kill us both I reasoned. As we crossed the bridge over the Mtkvari River that same woman turned towards a church and made the sign of the cross.

Russians with Birds for Photos near the Narakali Fortress

I was getting sweaty in the humid air. It wasn’t summer yet. But by Alaskan standards it certainly was. And everyone was wearing black coats like it was a chilly spring day. I found a tourist information bureau and stepped in and asked where the nearest bank machine was. Two pleasant black haired girls pointed down Rustaveli Street and I thanked them ‘Madloba.’ and turned to walk away as I did they both called out in English, ‘Where are you from?’ I said ‘Alaska’ and they were suitably impressed enough to ask a few questions and smile quite welcomingly at me. My first taste of Georgian curiosity.

A Photo Shoot in Traditional Costume

I did indeed get my lari and fill up my metro card. The metro itself was a relic of the Soviet Era and was buried deeper than any public underground transport I’d ever been on. The escalator ride down took about two minutes. Some local kids would just sit on the descending stairs. Other folks would practically trip over them on their way down into the tepid windy tunnels. 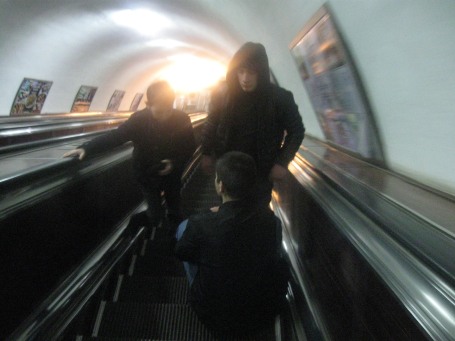 Sitting on the Escalators

Fortunately in many public places besides the Georgian alphabet there was often English. And so I was not completely bewildered. But as I waited to hear from my contacts in Georgia I spent a couple of days sightseeing. I got thoroughly lost looking for the outdoor ethnographic museum. I found myself wandering on a highway in the hills as I tried to descend from the statue of Mother Georgia down into a botanical garden, that I never did get to. I sampled the Georgian cuisine, discovering some unimagined use of certain spices that I couldn’t put my finger on. But in the swirling confusion of those first few days I was often completely askew. Yet the disorientation often had me admiring ruins of elaborate structures from a forgotten time.

One morning I went seeking what an official Tbilisi website designated as the ‘Animated Puppet Museum’. It was considered a national museum. I had no idea that Georgia even made stop motion animation films. Yet my peripatetic wanderings only led to the street address number 23, only to find myself staring at a rusting plaque on a wall reading ‘Karlo Sulakaure – Puppetton (?) Animation Doll Museum’. In a note from the Quays, they immediately conjured up a story about this. One can only most see their film. “Somebody probably walked out, locked up, and then passed away and that person had the only key…” Meanwhile what lay beyond that decaying sign? What indeed? 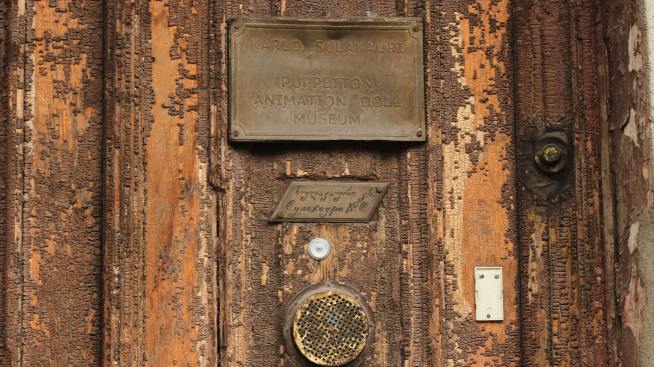 The Mysterious Locked Door at the Animated Puppet Museum

Sweaty lost wanderings, past indecipherable script, past faces I had never seen before in my life, began to create a sense of real dislocation. And I had really studied up on the culture. And I had lived in New York City for 16 years, I’d seen many types of faces. Nevertheless the I felt I had landed on Mars. Where were the puppet theatres? (One was on tour. Another had vanished.) Where was the Georgian music? McDonald’s blared American pop music into the streets. And I was beginning to wonder if perhaps I’d made some sort of mistake in coming here. And I had signed up for three weeks of this.

Then singer Mariam Elieshvili contacted me. (We’ll spend more time with Mariam soon.) And I met her and her mother down at Marjanishvili Square, near where I was staying. She was on her way to a television station to do her show. But we spoke for almost a half hour. She was open faced and very glad to finally meet me. She had ideas about musicians for me to meet. She was the embodiment of charm and courtesy. And with that the spell was broken. My Georgian experience was about to burst wide open.

You must keep reading…