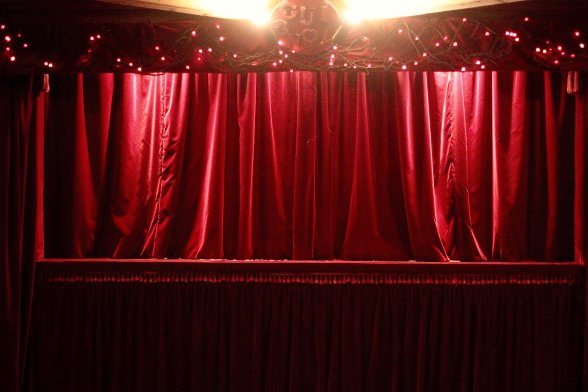 And so I took off from Tbilisi to stopover at Warsaw’s Chopin Airport for a quick transfer to another Lot plane to Paris. At least that was the plan. I knew I was in trouble when the flight was delayed a little to begin with. And I only had 50 minutes originally to get make my connecting flight. 50 minutes to get get through the European Union passport control and walk the endless building. Which had been whittled down to 15 minutes by the time we landed. But they let me get through customs rather quickly. But then I turned a corner to run smack dab into another airport inspection. And while no else was there yet, they held me up a precious five minutes, to go through my stuff thoroughly. And I guess because I was looking hurried and sweaty they decided I needed extra security procedures. So they tested my hands for ballistics and looked carefully at my laptop etc etc, all in the time honored tradition of Polish paranoia, a tradition I refused to accept as an inheritance from my mother.

Then, finally, at last, I was allowed through and now I raced blindly, stupidly, down what seemed like an endless terminal just to watch my plane back away from the gate. And so I was stuck at the airport for another 6 hours. I’ve got to figure out these crazy connections someday. This wasn’t the first time I had been flustered by this particular Lot connecting flight. Warsaw’s Chopin was quickly joining London’s Heathrow as one of my least favorite airports. Well I tried to make the best of it. Lot did give me a voucher which didn’t quite cover a whole meal. And I sat and wrote one of my many essays about this journey. Eventually I was aboard another flight. I sailed through French customs and the train, eventually exiting a bus back in L’Haÿ-les-Roses in the southern suburbs of Paris, back at the Caron’s house, where Gilles and Lori were waiting for my arrival along with Paulette’s brother Julien. 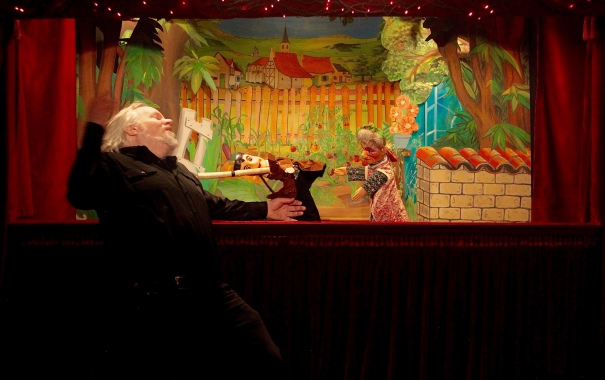 One of the things that I had arranged while back in Georgia was to visit along with puppeteer friend Paulette Caron, a performance of Les Petits Bouffons de Paris. Paulette had been working as a guignoliste in Lyon and the Lyonnaise and Parisian style differ quite a bit. I contacted my friend Pascal Pruvost to see if we could come with him to his show in the banlieue of Paris. We hadn’t been able to make it work in late 2017 but now schedules seemed to align. We woke up early and took the train and metro out to the 20th Arrondissement to meet him at his studio near Pere Lachaise Cemetery. Paulette and I stood quietly on the slowly awakening street. After a time Pascal arrived. We eventually roused his co-guignoliste Bernard from a bed not to far away. And then we were off through the unsightly parts of Paris that most tourists never get to. We arrived at Parc des Chanteraines, still in a wintry mood. I had been here before in 2012. This time I would record their show from a different perspective. Meanwhile Paulette talked with Pascal about his show and techniques. Pascal, all skin and nerves, would not be an American’s first choice of a puppeteer for children. And yet here in Paris it seemed perfect that he and Bernard, his rather surreal confrere, would be performing for les enfants. One wants quirky people in charge of the traditions of a culture.

Soon it was time for the children. Pascal apologized a little because the age of the kids was quite young, between four and five years old. But that was fine for me. And while an older group might have been wilder, this group took Pascal’s cues quite nicely and responded enthusiastically. When someone got beat up they laughed. (Oh no! That’s not nice! Yeah, but that’s kind of the point.) Cheers went up from the petite children, who thoroughly enjoyed the show, adding to the catalogue of attributes that make up Frenchness. 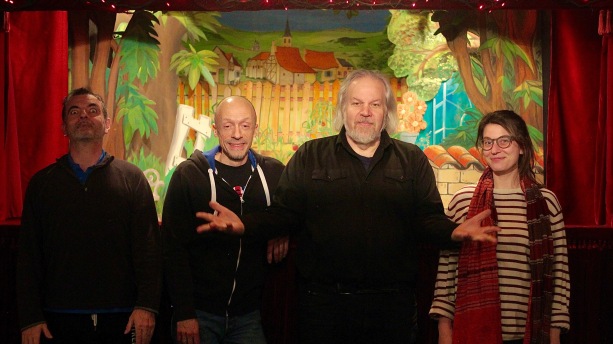 On the drive back Pascal, who worries a lot about the effect of the cascades of recent immigrants on France, drove us passed a squat in the divider of a highway where an encampment of the migrants lived in squalor in ramshackle tents. They had created a small realm of trash bags and debris and were living in it. It was hard to understand why they living in the middle of the highway overpasses. I didn’t really have an opinion. But clearly Pascal and Paulette both had many thoughts on the subject. And it was clear that there was something brewing here that would not simply go away. As an outsider to French (or any society) I’ve learned to not spew my own opinions about things I don’t really understand, especially when based on the shallow reporting of the American media. 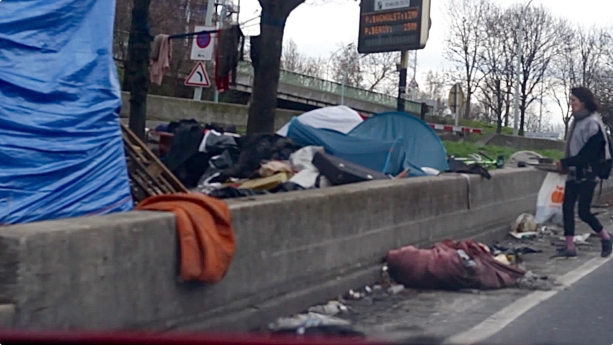 The disturbing site of migrant squatters on a French highway divider.

The next day was Saturday, Passover and Western Easter weekend. And I was invited over to Paulette’s boyfriend Simon’s mother’s house not far from her parents house for a Pesach (Passover) Seder. I was quite fascinated to go since I had never attended one before. And this seemed like a good choice, since while they were Jewish they were not strict Orthodox Jews, and thus my faux pas would be over looked. We arrived at her cozy little house and settled in. When the rest of the gathering had arrived we slowly worked our way through about half of the meal while reading from a booklet in French, which contained the famous phrases and answers like “Why is this night different from all others?” I surprised myself by actually reading my portion in French without a hitch, a small milestone for me. We ate the unleavened bread (matzo) and drank wine and bitter herbs and other traditional foods. I was struck by how much the Christian communion had been adapted from the service. This along with my first Georgian supra, also not the full affair, but close enough, were two new traditions that I felt honored to be able to share in one year.

Eventually, after warm farewells at the Carons, punctuated with French cheese, it was time to leave Paris and to take my Icelandair flight back to Seattle and then the Alaska Airlines flight to Juneau. I began to suspect things weren’t going to go smoothly when I arrived to an overcrowded Charles De Gaulle terminal, where all Iceland flights were being delayed because of severe snow back in Reykjavik. And so my flight was delayed by over two hours in Paris which then had an immediate ripple effect. This created another hour delay once we arrived in Iceland, and this meant I would missed my connection from Seattle to Juneau, causing me to stay overnight on the airlines tab in Seattle. And that then meant I would miss my ferry to Haines, causing me a two day delay in Juneau, where fortunately friend and erstwhile clown (!) Roblin Gray Davis put me up until I could get the early boat to Haines. And finally I arrived back in Haines where dear friend Martha Mackowiak met me and drove me to my dead car, where Scott Hansen was performing yeoman’s duty to resuscitate it. At last I entered the very cold house of my Haines Belgian friend Alain d’Epremesnil, who was still out of town counting tortoises in the Mojave Desert, to kick the wood stove to life. I was back in Haines.

My old Quonset Hut near the end of its days.

Within two weeks of my arrival the old Quonset Hut I had lived in for 21 years had been razed to the ground and turned into an empty lot. It seemed to me to be a final message that it would soon be time to move on. But not before working through the summer season here in Haines and bidding a proper adieu to the land that has nurtured and taught me too much to describe here.

An empty space where so much living once occurred.

But I’m not quite done writing about this truly life altering journey. Next time I’ll give a brief summary of what I have been through and what it means to me at this juncture in time. Come back then…

And so don’t forget you can still help with the project, and we will be moving everything to Tbilisi Georgia. Donate here through PayPal.