The Breath of the Doll 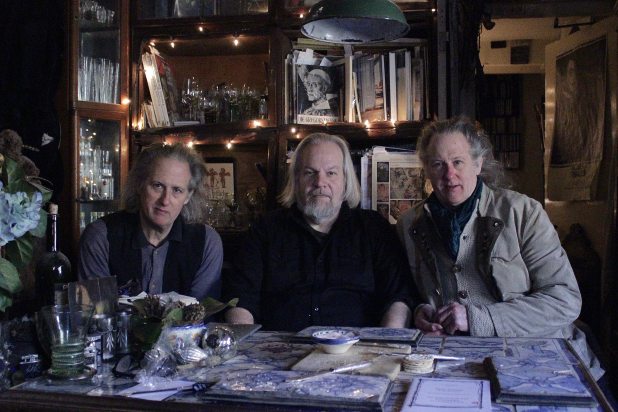 With the Quays in Atelier Koninck QbfZ

I jumped up on the all night train from Milan to Paris. I tried to open the door to my three person birth. It was locked, then undone, and I was welcomed to share the compartment with an Italian IT technician named Filippo on his way to Paris to work on a job. He and I were fortunately the only two sharing the room. He took the darker top bunk on the mistaken, we discovered in the morning, notion that some of the lights didn’t turn off. I was happy with the bottom bed, after taping something on the lights to cut down the glare. In the morning we had a interesting discussion about video games and fiction. After I told him about some of my stories, one will be self-published this summer. He demanded I give him contact information so that he could read my work and follow my progress. That was somewhat flattering I must say. Now let’s make good on that. 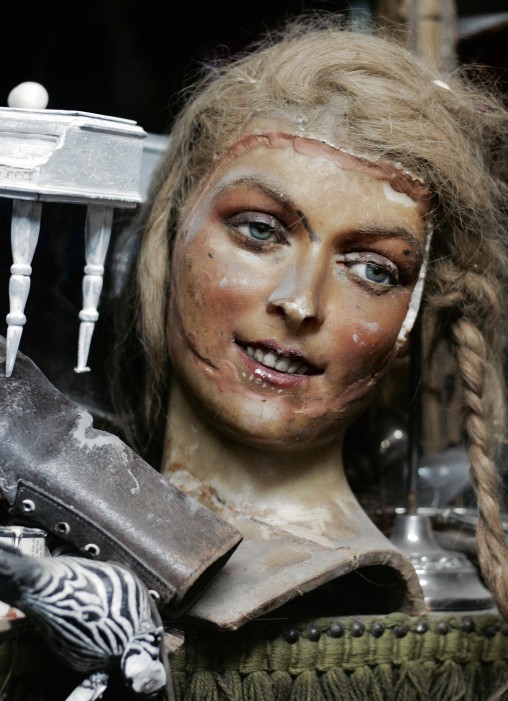 A Casual yet Strange Face from the Quays studio.

I arrived in Paris and rode the metro and bus out to my European home with the Carons out in the Ile de France. I had picked up an annoying, but not debilitating, minor cold in Rome that would linger for over a week. And so I used my down time in Paris to rest, see a movie (Les Gardiennes was a French World War I film that met my hunger for something grown up in this childish age.) and basically take it easy before going to London to visit the Quay Brothers. Before I left I dropped in on a store near Place de Republique called Heeza that I had bought a few odd items from online. Back in 2016 I had come here to search Heeza out but they were not open. But this time after a little effort I managed to get in. (There is no storefront.)

Pierre at Heeza awaiting who knows who to walk through the door. (Not my photo.)

Once inside I met the owner Pierre who was an affable Frenchman who had very eccentric and intellectual interests in things like old silent film, primitive cinema, odd animation (lots of Švankmajer and Starewitch), a limited choice bandes dessinées (French and European comics), not to forget strange postcards, old fashioned games, and flipbooks. More importantly he stocks recreations of pre-film optical devices like the praxinoscope, the thaumatrope, the zoetrope, the phenakistascope, the camera obscura and of course the magic lantern. (If you got even two of those names you’re doing well. Go check out his site. Fantastic stuff.) Plus books on all of this. We discussed puppets in animation. And he was curious himself why he didn’t have more on the puppets. I ended up buying a mysterious DVD by Patrick Bokanowski call L’Ange (The Angel) a favorite it turns out of the Quays.

A curious creature in the Quays world. I’m calling him Forkhead.

As we were talking a couple of Ukrainian clowns walked in. (You really can’t invent this sort of thing. And what is it with clowns on this journey?) Now they weren’t dressed up! And they were on their way to Bordeaux to perform. Nevertheless we had a fascinating discussion about clowning techniques and how this little store was a perfect lure for truly intriguing people. I told the Quays later in London that they had to drop in sometime. You get the point. (Look them up online!)

Where the Quays perform their ministrations. The sets for A Doll’s Breath.

Well eventually it was time to grab the old Eurostar chunnel express and zip over to London. I arrived on a wet London afternoon. And cursed the whole payment system for the London Underground. (Less than three days and more than $45 on spent on the Tube.) I was scheduled to drop in the next morning on the animating brothers so I did the appropriate thing. I went to the IMAX theatre where they were still showing Dunkirk. Since I had missed it in Alaska, this was my chance to see this perversely adult summer World War 2 epic with massive sound and huge screen. And I was duly impressed. I’m still weighing my thoughts about the film.

Being greeted at the Quays by a Dickensian Nightmare.

There was an degree of pressure at the Quays Atelier Koninck QbfZ. A mysterious benefactor had about a year and half earlier commissioned the Quays to make a film. Not a specific item for him personally. But, generously, to do what they did best. Make their own idea into a film. Institutions around the world aren’t exactly lining up to fund their films in this age of bottom line financial mania. The Quays were actually mid-way through another project when this person approached them. But since it was digital and he being interested in film rather than digital creations, he wasn’t so keen on it. One of his stipulations was that it be shot on 35mm film stock with their old cameras. But he basically said here’s a certain amount. Would you like to make a a real film out of it? What could they say? Why, yes! And now he was coming to check out what they had done on the 19th of December. And I had arrived on the 12th. So essentially my visit was a break in round-the-clock filming and editing (digitally then transferred back to film stock).

Real Fish Teeth adorn this actor from A Doll’s Breath

Well the brothers carved out a couple of hours in the morning. As they said in an email “Why don’t you come at 10am and we’ll throw you out at noon.” Sounded fine to me. We met as old friends and immediately traversed a wide variety of subjects from Sicilian marionettes to the Symbolist works of Marcel Schwob, whom I had been reading. We mentioned Bulgakov’s Heart of the Dog as an opera with puppets. There were storage problems for their arcane studio, moving things up into the rafters to create something like a balcony. Evidently Švankmajer’s new film Insects is finished and will have a special Vimeo showing soon if you look for it. We also passed through subject of texture. They discussed their project, which at this moment officially is being called A Doll’s Breath. And the music for it is being done by Michèle Bokanowski, Patrick’s wife. And they seem quite pleased with her style.

Well time was passing and the hour of my ejection was coming. (Not exactly at the stroke of noon.) So I began wandering through their studio to photograph their oddities. It was something I’d always forgotten to do before. Several of the puppets for A Doll’s Breath were on hand. And I was allow to capture them. And there was a small set where they were still filming. I also was granted access to photograph that as well. Their place is quite thronged with strange little visual discoveries. Like the framed piece that they have had for many years that they never clean, except for one spot revealing a small face. At one point I realized that they had turned off the light for their little set. Rather than ask for the lights back I decided to take a picture in the darkened conditions, which seemed more appropriate.

Years of dust and the Revealed Boy.

Finally it time allowed us to talk a bit more while sharing a bottle of very dark wine I had brought from Sicily and some potent brie interlarded with truffles from France. For a little creative inspiration I promised to bring them a dried salmon head back from Alaska next time I visited. Alas it was time to leave them to their metaphysical activities. We would indeed see each other in the next year. After a fond farewells I ambled out into the gray London weather gladly satisfied that I’d crossed the channel to catch up with the Brothers Quay. 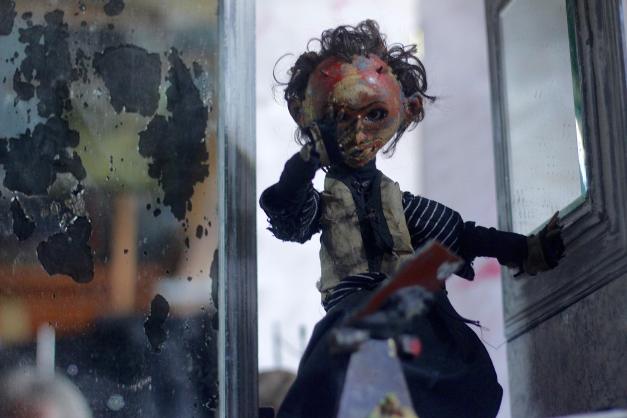 On the set of A Doll’s Breath

Byrne Power
From the Chopin Airport in Warsaw, Poland waiting for a flight to Tbilisi
12/21/2017

PS. An abscessed tooth, London Tube costs, all the other stuff I’ve mentioned in my earlier postscripts. After doing my budget its clear things have become tight for Georgia. So really if you can thrown in a few coins in my PayPal account that would be greatly appreciated. It’s simple and effective. Click here.