After getting stuck on the Swiss French border for two and a half hours with a French Swiss Butoh artist on my way to Chamonix, where I was correctly warned that there was nothing to do. I eventually made my way to Lyon. I’d never been there before and was curious to see the old town and to look for a Guignol show. I made my way to yet another cheap European hotel with perhaps the funkiest fixtures in the toilette room that I had yet to encounter… which is really saying something. Tiles were coming up on the floor. There was no distinction whatsoever between the shower stall and the rest of the teensy chamber except a flimsy porous curtain that stopped exactly no water from spraying over the rest of the room. Yet even with such dodgy accommodations I can safely say that Lyon was probably the most interesting discovery of the entire trip.

The Dark Traboules of Lyon

The Author Deep in the Traboules

First of all, to get a bit touristy here for a moment, the town is a gem. It easily rose to my third favorite town in Europe after Paris and Prague. Reason number one? The old town with its strange passageways called traboules. These were narrow walkways that lead into and through old Renaissance buildings. They were dark and mysterious, helping to give Lyon a reputation for underground conspiracy. Then there was the fact that the vast majority of the people on the streets were French. It was a busy city indeed, yet it didn’t have that chaos of languages one associates with many a large European city. It was also the gastronomy capital of France. Think about that again. Yeah food. I had one meal that simply stopped me in my tracks. I wandered home through the streets feeling completely satisfied in a way few other meals ever made me feel. And without mentioning the cathedrals, Roman amphitheater or other special Lyonnais traditions I will simply point out the best reason I found for going there. It’s a puppet city!

There are two very important reasons to visit Lyon in relationship to puppetry. First, it is the birthplace of the famous puppet Guignol, who, dressed in the garments of a canut, a silk weaver, the town’s most historic profession, is now over two hundred years old. And it was my mission to see a Lyonnais Guignol performance, which I sadly failed at. But I did have a chance to attend another show by the Swiss Cause Toujours, which incorporated some aspects of the Guignol idea in a fairytale format. It was fascinating to watch the children at this show. As in the Parisian Guignol shows I had seen the children really got involved in the performance so much so that when a good character gets tormented they all individually called out ‘Non!’ even ‘It’s not fair!’ And this lead me to realize how much the children were learning at these little puppet shows: They realized that something had violated the logic of the story. The need for a correction. The question why do the good suffer. Even their ability as critics to say something about the content of the play. I was hard pressed to think of anything in American culture that acted the same way for children. I’m still thinking about it. 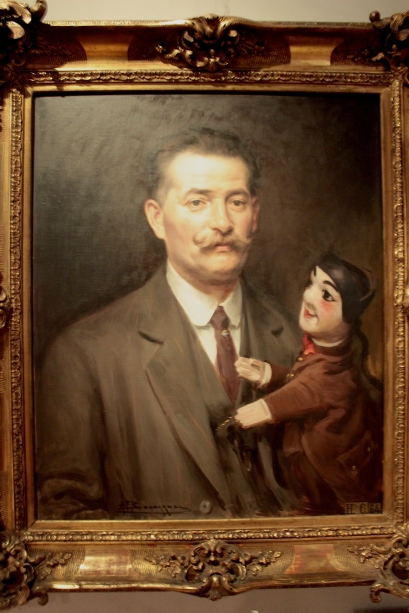 Laurent Mourget who created Guignol in 1808

I did see Guignol puppets for sale. Some expensive ones at that. But essentially I’d have to wait to see a Lyonnais Guignol show. Though I did keep running into Guignol everywhere in Lyon.

Before there was Guignol the French had Polichinelle, a direct relative of Punch.

The second reason why Lyon is important in the realm of puppetry is because of the Gadagne Museum , which, simply put, is one of the best puppet museums in Europe. Upon entering one is brought face to carved face with some figures dating back to the late 18th Century, practically prehistoric for puppet history. With their blankly curious wooden countenances they take one into a zone where one is confronted with the enigma of human creativity. The museum present a multitude of les marionnettes (the French word for all puppets), including the ugliest and eeriest puppet I’ve ever seen, looking like Punch’s Judy, as well as strange trick puppets, marionettes holding marionettes holding marionettes, and puppets from several other countries including a magnificent Japanese bunraku puppet. I spoke with one of the museum folks who told me to come back the next day to meet La Directrice of the museum.

A Judy type puppet in the Musée Gadagne, easily one of the creepiest puppets I’ve ever seen…

This is a truly complex puppet or two or three

Maria-Anne Privat-Savigny is not what one imagines when one imagines a director of a great city’s museum (the Gadagne also houses the history of Lyon itself). Lively, deftly fashionable, witty and engaged she immediately caught the point of my documentary and was excited by the project. She filled me in with many possibilities related to Guignol, told me which historians I needed to contact, gave me permission to include some of the truly arresting puppets I had encountered in the museum. She essentially left the door wide open for future contacts. I left quite encouraged about coming back to Lyon both to investigate more puppetry and to explore the city again.

The Carousel in the Heart of Lyon

There was one thing that struck me about Lyon that is hard to put into words. I had been to quite a few European cities thus far. The centers of the old towns were often luxury shopping districts of the most elitist variety. Or tourist zones ready to pounce upon the unwary. But in Lyon I looked around at the Lyonnais and others shopping in their elegant stores and and it all struck me differently. It’s a cliché, the French joie de vivre. One doesn’t actually run into it in Paris. But here it was in plain view. If any one thing spoke of that clearest to me it was an old carousel in the middle of one of the downtown squares. Children took their rides on the old horses, etc and parents sat by watching into the evening. Meanwhile I stood by taking it all in, while eating a simple crêpe au sucre. It was a perfect moment. Perhaps the only time in my adult life where I wished I was a child again.

My advice… visit Guignol and the Musée Gadagne in Lyon.