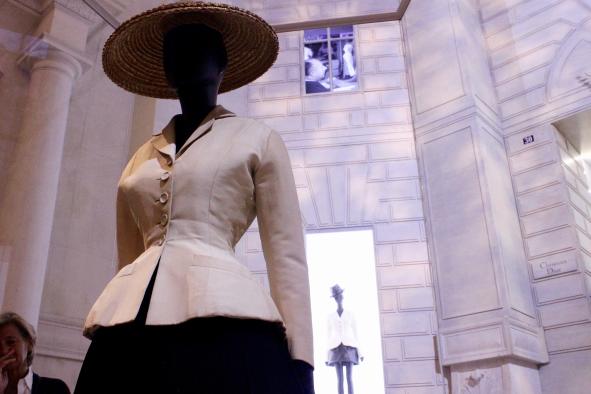 The New Look from Dior the beginning of the post-war revolution.

I was whisked from Brussels back to Paris on the TGV. Sitting next to me was a young woman in sloppily dyed greenish/blondish hair reading Russian. We struck up a conversation and it turned out that Olga worked for one of the three larger media conglomerates in Moscow and within a few moments she revealed to me the depth of the state control on all the media outlets there. I don’t think writing this will get her in trouble since Olga is an extremely common name (though the green tint not so much), and she didn’t act particularly worried about it, and besides I suspect that these essays are on no one’s radar. She was taking a break to come look for art in Paris and was quite curious about the Symbolist museum I’d visited in Brussels. She was also going to see a progressive metal concert in Paris the same night I was scheduled to catch up with the Gabriadze Theatre’s performance of Ramona. I helped her get situated at Gare de l’Est and the continued on by metro and bus to L’Häye Les Roses in the southern banlieue of Paris to stay with Paulette’s parents Gilles and Lori Caron.

This was my home base on my journey through Europe and I would be breaking bread and sharing good conversation with them off and on until I finally took a plane to Georgia in late December. I also was getting to know Paulette’s younger brother Julian, who is an avid gamer and is aware that his chosen field is a battleground of sorts. He is working on a theses concerning the sociology of gaming. And was aware the some aspects of gaming had an extremely addictive quality built into them by the designers (MMORPG’s for instance). He himself was actually working on games to be played in real time, without computers, roughly based on the old Dungeons and Dragon model. He could see the importance of not being disconnected from living breathing humanity. A worthy discussion was had all round. 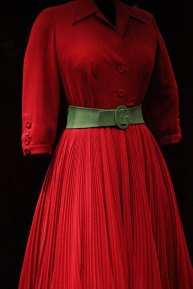 A wall of white gowns

A study in texture

The Room Turns to Winter 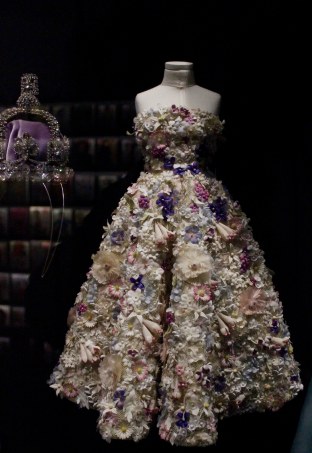 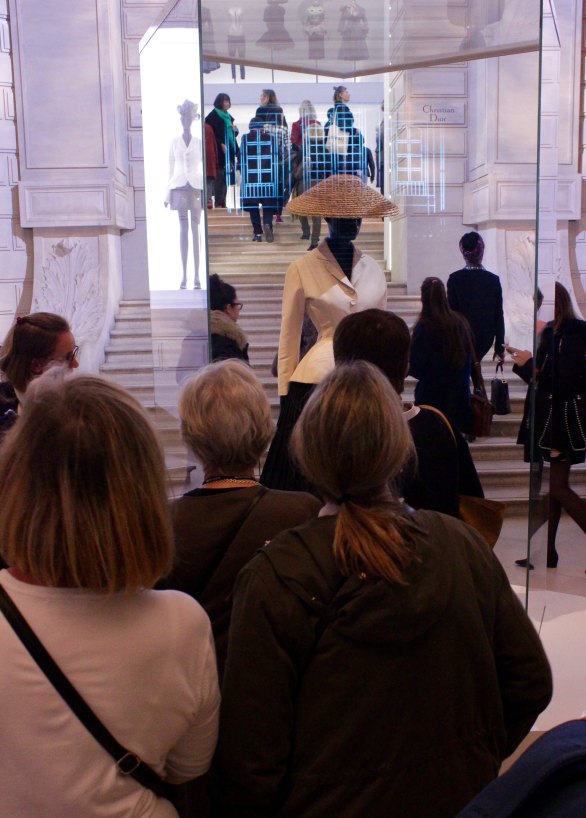 The New Look started it all

Since I was only in Paris for a few days I decided to make the best of it. After a day off, working on practical chores, I decided go to the Musée des Arts Décoratifs to see the Christian Dior retrospective. It was quite crowded but I’m quite glad I waded through the humanity to see Dior’s fashions. Part of my reason for coming was in my continuing to think about texture and its affect upon us. And indeed there was much food for thought here. (I thought of several friends who would have feasted on this exhibition.) Now I won’t say that everything in the show caught my eye. Occasionally there were the kinds of clothes that seemed too fashionable, too haute couture, for my tastes. But when confronted with actual items made of a vast variety of textures I was smitten by the way texture changes everything. And how so many clothes today (T-Shirts with slogans, yoga pants, gray sweat shirt material, various polyblends) see so lifeless by comparison. The weave of a fabric changes its texture, changes its meaning. While we, American’s are particularly bad at this, seem to have only one criterion left, comfort. But I was certainly converted to a more truly beautiful aesthetic by my stroll through this gargantuan exhibit.

The Darker side of Dior

Finally on the same November evening I took a bus over to Le Monfort théâtre in the 14th Arrondissement to see the Rezo Gabriadze Marionette Theatre’s production of Ramona. And this proved to be one of the best puppet shows I’d ever seen in my life. The story concerned two trains in the old USSR, one named Ramona, who are separated by the socialist call to duty during World War II. The trains are given character and the supporting cast of puppets were made largely of various socialist functionaries. The trains are constantly separated from each other by war, circumstances, and communist decrees. And in the end both trains are scrapped. And in the heartbreaking twist they are both melted down together to form one essence.

The puppeteers performed largely on a tabletop dressed in black faces exposed. Related to, but unlike, bunraku style. I approached one of the puppeteers after the show to introduce myself. He did speak English yet didn’t know exactly what he could do for me. But then as I turned to walk away the puppeteer called me back. He told me to wait while he called a man over to meet me. Rezo Gabriadze is no longer traveling with the troupe due to his age. But I was introduced to his son Leo and he was glad to meet me. And I will indeed be visiting them again in Tbilisi in 2018.

The Curtain before the show

I also met another Russian, Irene, who was an actress come down from Saint Petersburg who had two months to try to get involved with French film or theatre before her visa expired. And something in her manner struck me in that elusive manner that only the Russians can generate; part mystery, part tragedy. All in all this little interlude proved to be evocative on many levels. And inspired many new thoughts and ideas.

Love and Trains in the Gabriadze Theatre’s brilliant Ramona