How Far Can One Go?

Only those who will risk going too far can possibly find out how far one can go.

The season changes. The unknown beckons. It’s been a short time since I wrote to delineate the developments in our Gravity From Above documentary and the coming major journey. And there have been several good reasons for that.

First of all last I wrote it was mid-fundraiser. And I haven’t wanted to keep writing after going through the endlessly necessary and annoying task of pleading for donations. It was time to give you all a break. Now on the sidebar here I have written to thank everyone, as I have through Facebook, for helping us to achieve our modest goal for this trip. In a nutshell, we received enough money through Indiegogo to let you know that we took home about $3,700 after they took their cut. Besides that we received more money through a live fundraiser in Haines and another $1,100 through donations on my PayPal account through this site here. (Hint. Hint.) bringing us over $5,000 for this site. The PayPal contributions here are actually more beneficial since they only take 3% away versus Indiegogo’s 8.5%. So if you choose to add to our funds as we travel then please feel free to do so. I can say this with absolute conviction we are traveling on the cheap here and will be counting our pennies, cents, centimes and tetri.

Boxing my Wall of Sound. My vinyl LP collection.

The second reason for the delay is that I have also been packing my entire life into boxes and taking them over to a nearby storage facility. And this will involve as many as five hundred boxes. Acquaintances will often commiserate and tell me how they know that moving takes a while. They mean well. I usually don’t disabuse them of the difference between what I mean when I say moving as opposed to what they mean. I will simply say this: When I moved up to Alaska 20 years ago my library weighed over 10,000 lbs (over 4500 kgs). That is most likely on a different order than what most people mean by the minor difficulties in moving. It takes two months simply packing everyday.

One half of my cheap Icelandair ticket from Juneau to Paris.

Thirdly… Oh yeah, I’ve been planning for what is now a six month journey into Europe. And that requires plenty of planning all by itself. I’ve been writing back and forth to puppeteers and friends. I’ve been trying to stay with people as much as possible and trying to reduce my costs as much as possible. I’ve been wrangling with Polish airlines and hotel booking sites and the inevitable mistakes that arise in undertaking such an intense endeavor. And since I am effectively in a form of exile during this time I must fill up my entire schedule. Returning for a month for Christmas and New Year isn’t an option. So there have been plane and ferry tickets, several hotel rooms, an apartment in Georgia for three months, and train reservations to make all requiring serious expenditures and much forethought. There are calendars to fill, itineraries to write, schedules to consult, maps to study, researches to follow, guide books to read. How do I travel from the train to the hotel? From the hotel to the puppet theatre? A journey this vast takes serious thought and time to construct. Especially if I want to have a meaningful trip and not just a series of random encounters. (Sometime soon I’m going to write about my traveling philosophy and how I really do manage to have such meaningful experiences.) 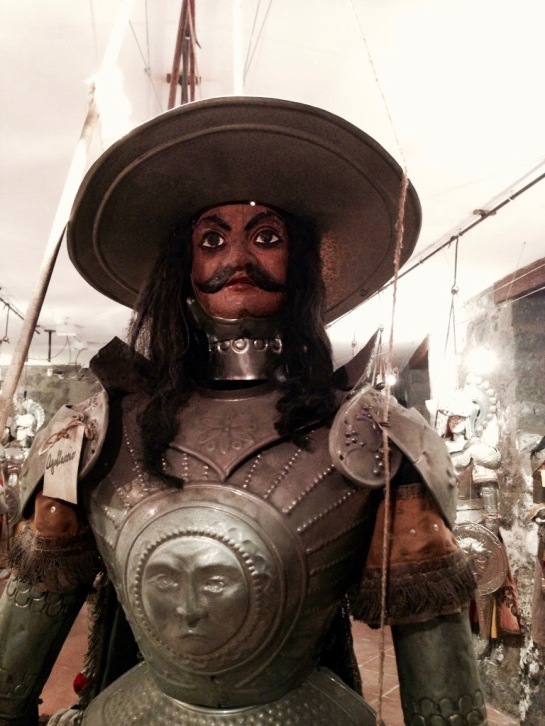 The Antique World of Sicilian Marionettes beckons me to Palermo, Italy.

And now the good news… With the funds raised recently through my crowdfunding campaign I can now add Italy to my itinerary for the first time ever. (By the way without friends acquaintances and former supporters I would have made almost zilch from interested parties with whom I have had no previous contacts. Please prove me wrong! I have in the past been the recipient of a few very generous strangers’ largess. But not this time.) And I am very excited to finally get down to Italy. I will be going to Sicily to see the Sicilian marionettes in Palermo as well as a great puppet museum. And I will be going to Rome for the first time ever to see a puppet theatre with figures based on the commedia dell’arte. These two styles are some of the most foundational in European puppetry and I am privileged to finally witness them.

And then there’s This in Palermo. A time to reflect on my mortality and the meaning of human images in decay. But I’m sure I’m going to write much more about this in late November.

I will also get to spend more time in Brussels with the Toone and Peruchet marionette theatres. And this time I will be lodged with Toone. So I’m really looking forward to that. I will be able to visit Pascal Pruvost and Guignol again in Paris. And spend time with a new troupe in Lyon with my dear friend Paulette Caron. Plus I’ll be staying with her folks in the Paris area which will help save funds and allow me to dive more deeply into French culture. Plus there is the three week sojourn in Charleville at the International Puppetry Institute, which is what kicked this whole journey into gear in the first place. I’ll see the Quays again in December. Stay at L’Abri in Switzerland for a couple of weeks in November where I’ll give a couple lectures. And then there is the huge three month chunk of time in Georgia, which I know will produce cultural experiences that I can’t even begin to measure; puppetry, music and dance. And there will be much more. There will undoubtedly be more puppetry experiences, particularly in France. And there will be surprises. There will of course also be illnesses, stomach problems, sore feet, strange scenarios, missed connections, frustrations, misunderstandings and the usual headaches of real travel. These things come. You just bite the bullet and accept it.

Mariam P. one of the dancers at Sukhishvili in Tbilisi, Georgia in 2016.

But I can’t wait. Except for around two hundred more boxes to pack, some furniture to sell, serious cleaning up to do, a work season to finish up and too many last minute tasks to mention, except for that I’m ready!   I’ll be writing much more regularly now. So stick around and travel with me. And thanks to all those who have helped me with this journey… And those who will help in the months to come.