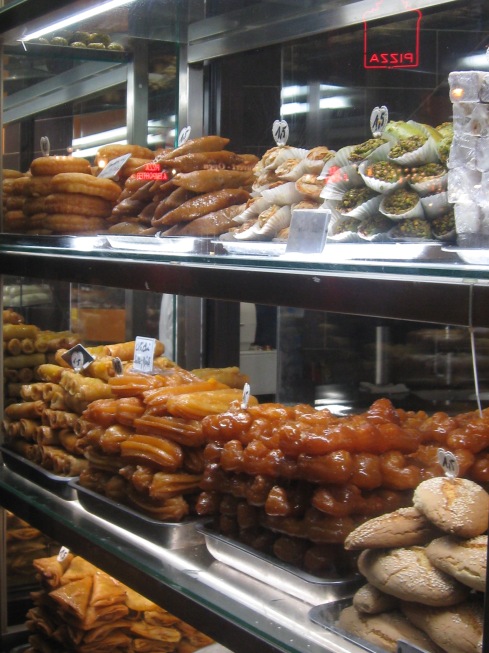 Tunisian desserts in the Latin Quarter, for when you finally are willing to make the leap into the Platonic notion of the Sweet.

And so I am in Paris, which was not meant to be a real stop on the trip but more of what the French call as ‘sas’, not really a place in itself, rather a place between places like the double doors with a little space as you enter a bank, or my mud room in Alaska. A place of decompression, an airlock. And that has certainly what Paris for me has been this time around. 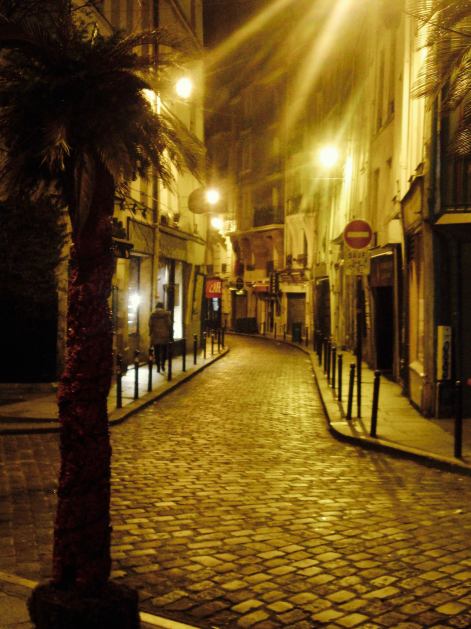 Wandering the 5e Arrondissement at 7AM.

I walked around, soaked in the ambiance of the 5th and 6th arrondissements, sometimes soaking in the rain. I rediscovered the French food I had been craving. There is a world of difference between an actual croissant in France and what passes for a croissant in small town Alaska. Then there is the inscrutable working class charm of the croque-monsieur. There are items in the average store that simply aren’t items to be found in the average American establishment, take Saint Marcelin cheese for instance. Or a bottle of Alsatian Gevurtztraminer wine. Both found in a Carrefour Express, the closest thing I’ve ever found to a convenience store here. 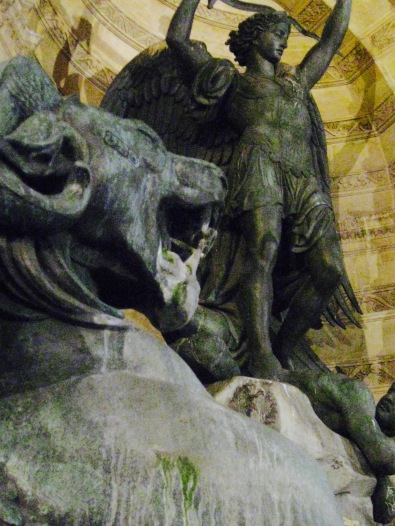 St. Michel and a Guardian Lion on the street in the 6e Arrondissement.

Then there are simply the streets. Even the humblest bit of architecture in old Paris is better than the best structure at present in Haines, Alaska. I spent my second morning, far too wakeful to sleep, strolling the still dark Paris winter streets, practically alone, at 7AM. I’ve spent enough time in France over the years, now making only the occasional cultural goof. Like not quite waiting for everyone to get off the Metro before I get on. Old New York habits die hard.

Paulette Caron stands in front of a particularly splendid door.

I met my dear puppetry friend, Paulette Caron, who escorted me around the 5th and allowed me to explore the Pantheon, the incredible mausoleum dedicated to the greats of France: Voltaire, Alexandre Dumas, Diderot, Victor Hugo, etc. etc. The crypt below did its work on me. It was low vaulted and labyrinthine in a darkened stone conclave. Meanwhile above, at ground level, the massive vaulted temple itself, the statues and paintings, including a few by Symbolist painter Puvis de Chavannes, had a strange funereal majesty.

He wishes these were his Guardians. Mourners over the tomb of Diderot at the Panthéon in Paris.

I stopped in a couple of odd stores and sat at few cafés with Paulette on a rainy Parisian day. But all was not crepes and cheese.

Several forms of uneasiness all seem to descend on me together. First there was the time zone difference. And I still felt sluggish and exhausted. My body did not know what time zone it was in. And when it did remind me it was graceless. Then I had developed a sore back from all of the crammed sitting in jets. And being as I am no longer a youngster, the pain doesn’t just leave at will. And finally, worst of all, I had been discovered by some French bug that had been going around, which turned my already confused insides to soup. At first I thought it might be the food but then after mentioning it to Paulette she told me that some gastrointestinal infection had been going around.

Meanwhile with Paulette’s help I managed to nail a few more stops down. I will be visiting Charleville Meziérès and the International puppet institute for a conversation on February 2nd and 3rd. And I will be hanging out with guignoliste Pascal Pruvost again February 9th. And to complete a week of Guignolism the Gadagne museum has set up three full days on the 10th, 11th and 12th. But there weren’t many puppets for me yet.

Alas, I did get taken to one theatrical presentation called Lady MacBeth. This was a version of Shakespeare’s MacBeth as told in a one woman show as object theatre. Object theatre is sort of the mutant offspring of puppetry and the avant garde. And so; little crystal glasses represented people, moving curtains evidently represented some sort of sexual encounter and there was no actual stage blood to be seen, or at least that’s what I’m told. I missed the murder scene thanks to the bowel bug. And evidently you do not even dream of leaving mid show in France, even for a bodily nightmare. As, yes, the doors are locked from the outside. And some poor usherette, who could not quite understand why I had to leave and then had to stand outside waiting for me so that she could let me back  in. She even poked her head in the restroom at one point to say “Quel’un?” (Anyone there?) I said ‘Allo!’ Unthinkable. But in fact it has to happen at some point. Such is travel. 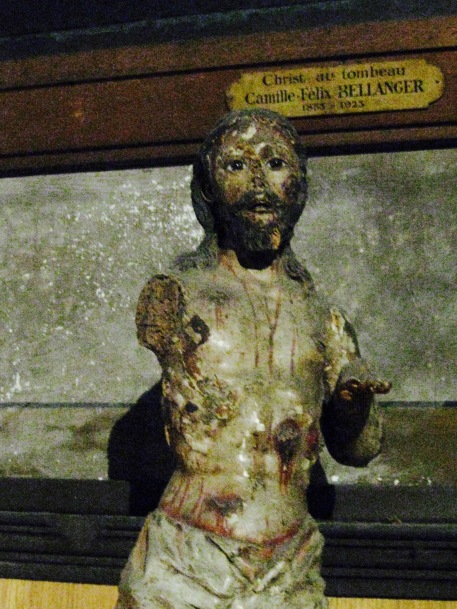 This is how I felt after my bout with the Parisian bug. A tattered statue of Christ in l’Eglise St. Severin.

There were actually a few puppetoid creatures made from a table cloth at one point. That was indeed interesting. But by and large the play did not add anything to Shakespeare’s MacBeth, except a rather facile comment at the end that the real villains were the witches who more or less seemed responsible for Lady M’s actions. Um?

And so I’m in the ‘sas’. Hoping to get settled into European existence as I cross back into England today to visit the Brothers Quay. 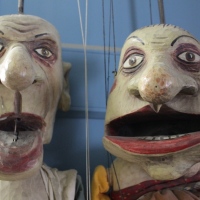 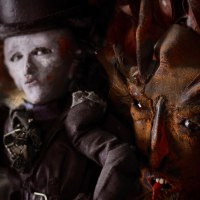