The train sped on with twists and curves all through the night as I slept fitfully in my bunk alone in my sleeper cabin on the way from Warsaw to Vienna. My back was bothering me from carrying too many kilos on it and my stomach was in odd shape. So I couldn’t quite get the sleep I was hoping for. Ah… the imagined romance of rail travel.

The train pulled into Westbahnhof at about 7AM and after some finagling I bought a two day pass for public transportation and made my way to the Hotel Congress. Fortunately they had a room ready for me at the early hour so I settled in rested a bit more then departed to find the Österreichischen Theatermuseum (Austrian Theater Museum). 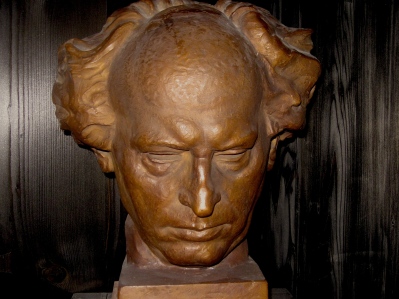 A bust of Richard Teschner in the Austrian Theater Museum

I walked through the museum district of old Wien, what was once the palatial estates of the Hapsburg Empire. I turned down a narrow lane and low and behold the Österreichischen Theatermuseum. I entered looking for something very specific: The puppets of the early 20th Century puppeteer Richard Teschner. I had sent an email but had received no reply. But that didn’t mean I didn’t want to actually see these exquisite works of art. Teschner had been a serious influence on the Brothers Quay, and much of European puppetry for that matter.

After paying my admission I ventured up the marble stairs past a statue of one of the muses, I assumed. I craned around and was slightly disappointed to find Teschner’s puppets in a darkened room where a projector was showing a documentary about a long gone Austrian tenor. But there in the dim light were Teschner’s creations. And they were every bit as marvelous as I had been led to believe from photographs and descriptions. Unfortunately his unique theater for them was not set up. So I took my little camera and photographed them in bad flash as well as I could.

What kept striking me over and over was the delicacy and the artistic integrity of the puppets. Teschner is important for many reasons in the world of puppetry, but it was by raising the bar for artistry that he made his greatest contribution. Some of his plays include the Weihnachtsspiel (The story of the Nativity of Christ), which was performed regularly, and for those really lucky souls in Vienna this December can watch an authentic recreation during the Christmas season. He also performed Nachtstück, Der Drachentöter (The Dragonslayer), Karneval, Die Lebensuhr and Der Basilisk (about the mythical creature). And each of these has wonderful photographically illustrated booklets dedicated to them available through the theater museum. I tried to at least talk to the curator of the exhibit, but missed her.

Note the delicate fabrics in all of Teschner’s Puppets

I discovered more about old Wien this time finding it a curious place to drift around. Vienna unlike Prague was never boiled in the communist cauldron. And so there is a continuity to the place, uninterrupted by scalding bath of ideology. Thus you never know what you’re going to find when you turn a corner. Naturally one finds many of the chic Euro-boutiques that deface many of the capitals of Europa. But here unlike Prague or Warsaw you can stumble upon some business or vendor that has been in operation for hundreds of years. I found stores selling old paintings in the most refreshing way. Not white walled gallery just painting leaning against painting in a haphazard manner. In the windows of these establishments one would see paintings one, two, three hundred years old in old windows. In that respect Wien is much more like Paris, a repository for antique European culture, than any of the old communist cities or the more modernized cities like London. Getting lost in the heart of Vienna is a wonderful way to explore the city.

A Little Symbolist Era Kitsch in an Old Storefront Window

And a great way to find food. I stumbled into a locals-only type of restaurant and ate a memorable meal of dumplings and beef goulash and had an interesting conversation with a waiter. I must confess I did end up the next day at a more tourist oriented restaurant and arrived before the lines form for there famous wiener schnitzel, I however chose the sweetbread schnitzel instead. Good food, over priced. But hunger got the best of me.

In Wien the Old and New Exist Side by Side

I enjoyed my cultural wanderings in Vienna, including a stop at the English language bookstore, Shakespeare and Co., which was unrelated to any other establishment of the same name. I actually saw an Austria film at a theater dedicated to showing European cinema. And what a breath of fresh air that was, since American fare so dominates the cultural landscape everywhere. The film was entitled Die Wand (The Wall), and it was set in the Alps. A woman gets trapped by a mysterious force field in a large tract of alpine land. Alone. With a few animals, including a milking cow. Apparently something has happened to the rest of the world. It’s very low key sci-fi. Worth watching, I did have a couple of quibbles. But I’d still recommend it. But certainly a change of pace from the monotony of American movies ca. 2012.

Eventually it was time to heft my backpack and equipment aboard the train again and head for Hallstatt, Austria, which was not a puppet related stop at all. It was time for a break… it was also time to break an important piece of needed equipment.

Leave a Reply to The Anadromist Cancel reply 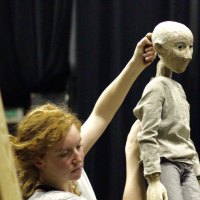 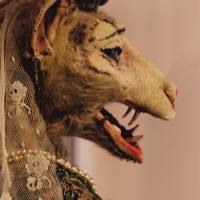 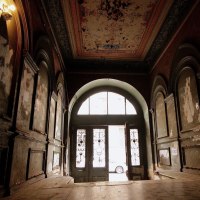